Calls for a criminal investigation into Ireland's latest banking scandal

The tracker mortgage scandal hitting Ireland has been linked to more than 22,000 mortgage holders. 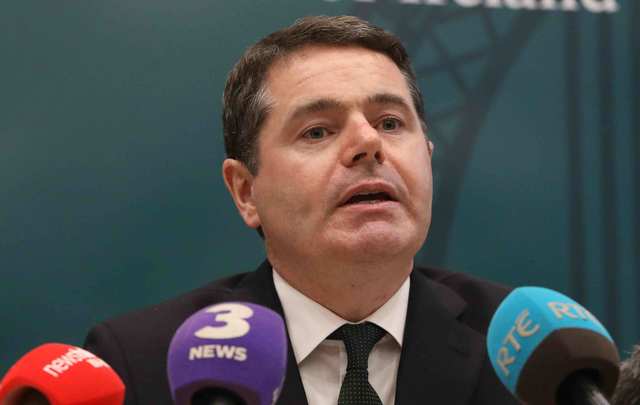 Minister for Finance and Public Expenditure & Reform Paschal Donohoe TD. Minister Donohoe spoke to media about the the Tracker Mortgage Examination being undertaken by the Central Bank. Leah Farrell

Shock revelations that up to 30,000 Irish mortgage holders have been defrauded by their banks have led to calls for a full criminal investigation to be carried out into Ireland’s tracker mortgage scandal.

Over the past couple of weeks, it has emerged that all five major banks operating in the Republic of Ireland are implicated in the multi-million euro scandal which resulted in some customers losing their homes.

At least 100 people across Ireland are believed to have lost their homes as a result of the scandal with the Minister for Finance, Paschal Donohue, describing the behavior of the banks as “disgraceful.” So far, more than 22,000 mortgage holders have been linked to the scandal and that figure is expected to rise.

Low-cost tracker mortgages are linked to the European Central Bank (ECB – the European equivalent of the Federal Reserve System) main borrowing rate, usually plus around 1%. These mortgages became far less profitable for Irish banks when the ECB lowered its rate dramatically at the height of the global financial crisis.

Last week, Minister Donohue called in senior managers from all five major banks – Bank of Ireland, Allied Irish Bank, KBC, Permanent TSB, and Ulster Bank – to reprimand them and to ask how they intended to resolve the issue.

“It is now time that all banks seek to regain the trust of the Irish people by actions, not words,” said Minister Donohue. “Customer interests have not been sufficiently protected or prioritized. This is unacceptable.”

Read more: Vexing and tragic crisis of homelessness in Ireland

What is happening in the tracker mortgage scandal in Ireland?

Permanent TCS is just one of the many guilty banks in the Irish tracker mortgage scandal. Image: Rolling News.ie.

As far back as 2006, just before the property crash, some tracker mortgage customers began to ask their banks to switch to fixed-rate mortgages, which would give them more certainty about their monthly payments, for periods of about three years.

Customers understood that they could return to tracker rates at the end of the fixed terms, but this did not happen.

Banks refused to return customers to the – by now much cheaper – tracker rates or else returned them to higher rates than the original tracker agreements.

This caused some customers so much hardship that they were unable to make their payments and, in some cases, even lost their homes.

The banks’ customers were being refused their legal right to the cheaper tracker mortgages, based on the record low ECB rates. In some cases, this added hundreds of euros to their monthly payments.

How have Irish mortgage holders been hit?

Bank whistleblower Jonathan Sugarman, who reported liquidity breaches at Unicredit Bank Ireland just months before the 2008 banking collapse, said he is surprised there are not protests on the streets and outside garda (Irish police) stations in response to this latest scandal.

“An estimated 22,000 people have been robbed by the banks and not a single person has been brought in by the gardaí” says Sugarman, who resigned from his position as a risk manager in 2007 and has been unable to find employment in the banking sector since then.

He has written a book, “The Whistleblower,” about his experiences in trying to report liquidity breaches and the lack of cooperation he has received from the Irish authorities after trying to do the right thing.

He feels he has been punished for trying to tell the truth and that the massive Irish ‘bailout’ in 2010, which has saddled the country with huge debts, could have been avoided if the banking regulators were doing their jobs.

“We have at least 22,000 people who should be turning up at their local garda stations to report their banks for fraud. The bank bailout cost the Irish people €70 billion (around $82 billion) in 2010 and now this tracker scandal is costing another half a billion.

Bank whistleblower Jonathan Sugarman is calling for more arrests to be made?

“How many bankers have gone to jail over the past ten years?  How hard has anyone tried to investigate them? Every bank in Ireland is required to have a risk manager and how many of them were doing their jobs?

“Who are the Central Bank, supposedly the regulators, there to protect – the tax-payers or the bankers? In Iceland, which has a population of just over 300,000, 25 bankers have been jailed. Not one has been jailed here in Ireland.”

Sugarman reported significant liquidity breaches to the Central Bank of Ireland in 2007, fearful that he could be sentenced to five years in prison due to his role as risk manager in Dublin.

He was shocked that the regulators failed to act after he reported the breach, months before it emerged that all Irish banks had liquidity problems – and received a guarantee from the Irish Government.

This led to the collapse of the Irish economy and a ‘bailout’ at a cost of almost €70 billion (around $82 billion) to the Irish taxpayers in 2010.

Sugarman was shocked by the inept enforcement of banking regulations prior to the massive bank guarantee made in September 2008. The guarantee prevented Irish banks from running out of cash but tied the future of the entire country to the survival of its banks.

As a result, he’s not really shocked to see 22,000 mortgage holders hit by this latest tracker mortgage scandal, which has again put the focus on regulation in the sector.

The banks have been accused of dragging their feet in relation to admitting their part in the scandal and compensating their customers for the crippling costs incurred.

“How come all the banks were making the same mistakes in relation to tracker mortgages over the same period of time?” asked Sugarman this week. “These banks work for you and me, they have been ‘bailed out’ by us, but they believe they can do as they please.

“They will continue to do so as long as the Irish authorities refuse to do their job. They have never been held to account despite costing the Irish taxpayers billions of euros. It’s as clear as broad daylight. This tracker mortgage scandal is a case of fraud.”

Speaking in the Dáil (Irish parliament) this week, People Before Profit TD Richard Boyd-Barrett said that nothing less than a full criminal investigation would suffice.

He said that up to 30,000 families had their lives damaged by the “criminal misconduct” of Irish bankers, resulting in anxiety, depression, houses lost, and strains on relationships.

“All of this done by incredibly profitable banks with obscenely paid executives getting huge bonuses, in some cases while still in public ownership. Now we get belated apologies, statements, and promises. They haven’t delivered,” he said.

“This is part of a long litany of crimes and misconduct by the banks. What is necessary is the criminal investigation, prosecuting, and jailing of the people who did this. Nothing less will put manners on these  ‘bank robbers’. Nothing less will show that they will not be able to get away with this in the future.”

Ciaran Tierney is a journalist, blogger, and digital storyteller, based in Galway, Ireland. Find him on Facebook at http://facebook.com/ciarantierneymedia

Are you among the thousands hit by the lastest Irish banking scandal?  Do you want a criminal investigation into the tracker mortgage scandal? Let us know about your experience in the comments section, below.