Vexing and tragic crisis of homelessness in Ireland

Truth is that even though we do have a very serious housing shortage, particularly in Dublin, relatively few people here end up on the street. 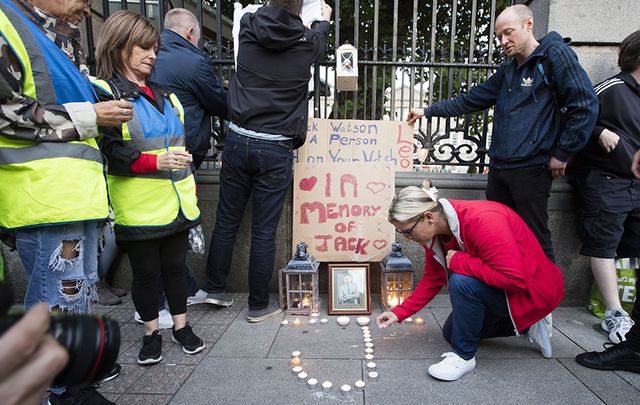 People held a protest outside the Dail on September 1 in memory of two homeless people who died in Dublin. RollingNews

The deaths of four homeless people in Ireland in one week shocked the country last week, and that is not surprising.  In a nominally Catholic country where we like to think we care for our people, it was truly shocking and led to angry demands for immediate action from the government to deal with the housing crisis here.

The story received blanket coverage in the Irish media last week, with headlines about homeless people dying on the streets.  Much of this coverage, both in newspapers and on TV, was full of emotion and outrage.

That is understandable.  But some of it was short on analysis of the underlying problem and even misleading.

It's far easier to do superficial, emotional interviews with rough sleepers on the streets about the hardships they face than it is to ask them searching questions about how they ended up there in the first place and why they stay there.  And of course the topic is great ammunition for opposition politicians and those on the left who hate the economic system we have.

The main problem in the coverage of the four deaths last week were the repeated references to the 8,000 homeless people in Ireland now, including 3,000 children, references that were frequently accompanied by pictures of people sleeping rough in Dublin city center.

Some of this coverage was picked up in the media in the U.K. and the U.S., which may have given the impression that there are 8,000 homeless people on the streets in Ireland.  Clearly that is not true.

They're not on the streets.  They're in emergency accommodation paid for by the state, usually in rooms in hotels and B&Bs. The conditions and restrictions they face are far from ideal, especially for families, but it's not the same as being on the street.

The truth is that even though we do have a very serious housing shortage, particularly in Dublin, relatively few people here end up on the street.  The most recent figure from the Dublin Region Homeless Executive, which carries out six monthly surveys, was that there were 161 people sleeping rough in the greater Dublin area in April this year.

Over the last 10 years of these surveys, the average is around 100. The figure is slightly higher now but it is not a crisis.  In fact the figure compares well with those for rough sleepers in other cities like London and New York.

This is mainly due to the opening of extra hostels in Dublin for rough sleepers over the last two years, with another 200 beds to be made available in the city before Christmas.  In fact the existing accommodation sometimes has vacant beds because some rough sleepers prefer to sleep outside, bedding down in doorways and camping out in tents.  The reasons are complex, since chronic rough sleepers often have alcohol, drug and mental health issues and don't like the rules in the hostels or claim that the hostels are noisy and dangerous.

The reality is that the problems of homelessness and people sleeping rough on the streets are different and separate.  Conflating the two may be good for emotive reporting on TV or in the papers, but it gives a false picture.

It does nothing to help people understand the wider problem we face here, a major problem of homelessness caused by the severe housing shortage, leading to high prices and soaring rents.  This has pushed more people into relying on the state to provide housing for them at a time when there is also a crisis in the provision of social housing.

The reason we have this housing crisis, as we have explained before, is because after the crash 10 years ago all construction here stopped, both private and public. As the economy slowed, demand for private housing slumped.

Developers and builders had gone bust anyway and had stopped building private houses and apartments. Construction workers either found other jobs or emigrated.

In public housing the situation was the same.  The state was virtually bankrupt so it could no longer fund local councils to build social housing. For five or six years no social housing at all was built and even now, with the economy recovering, only a handful of social housing units were built in most council areas in the past year even though there are tens of thousands of people on the waiting lists for a home.

Underlying all that, of course, was the fact that all the banks went bust in the crash so even if a developer had wanted to build it was impossible to get finance.  In short the whole housing industry ground to a halt and remained like that for most of the past 10 years. Only in the past year or two has it begun to get going again, although getting finance is still very difficult for builders with the banks being extremely cautious.

Most experts say we need to be building around 30,000 homes a year for at least the next six or seven years to meet the demand and end the homelessness crisis.  The problem we have is a lack of capacity and a lack of finance to do that at anything like the rate that is required.

Like the banks, the builders and developers are being very cautious. Although more builders are back on sites, it takes between two and three years to get a housing development completed here, sometimes even longer.  So there is no quick fix available to end the housing crisis.

Even though the economy is recovering, construction output is way behind and it could take up to 10 years to fully catch up.  This chronic lack of supply has meant that prices for private houses are soaring again, putting them beyond the reach of many people and forcing them to rent.

This has resulted in soaring rents in the private sector and many low-income families, often one-parent families, are finding themselves priced out of the rental market and eventually end up homeless.  Even with the state-provided Housing Assistance Payment, they can't afford the rents in the private sector. They then end up in emergency accommodation in hotel rooms while they wait for social housing to become available.

The only way to break this vicious cycle is to increase the supply of housing, both private and public.  But as we have seen that is easier said than done.

Putting emotive stories about rough sleepers on TV and blaming the government does not help.  It may ramp up the pressure, but it's still going to take years for the market here to catch up, and there is a limited amount the government can do about that given the budgetary constraints it still faces.

Having said that, the government and the new Minister for Housing Eoghan Murphy seem determined to do what they can.  Last week the minister hosted a conference of all the local councils to discuss ways of easing the situation.  Various initiatives were announced, including an extra 800 social homes to be built next year in addition to the 3,000 already planned.

There will also be a new mortgage to rent scheme, a lifeline for people who are way behind in mortgage payments and in danger of losing their homes.  There is to be a further €10 million in funding for the new "family hubs,” a form of group housing in large buildings instead of putting individual families in hotel rooms. Plus there is to be an expansion of the Housing Assistance Payment place finder service to all local councils to help people find whatever private rental accommodation is available.

Still under consideration by the government are proposals for a vacant home levy and several other measures to improve access to existing housing and security for tenants.  But the hard truth is that all these measures are unlikely to make a significant difference in the short term.

As we said, we are looking at a difficult housing situation here for up to a decade.  Until then prices and rents will stay high, too high for lower income workers to afford.  And we will have more homelessness.  There is no complete solution apart from patience and as much support as the state can provide.

It's certainly not the present government's fault since they inherited the mess from Fianna Fail which caused the crash in the first place through the property boom and collapse they oversaw.

This area of public policy and activity is particularly difficult because it primarily deals with people who are poor or vulnerable.  The deaths of four homeless people here a week ago were tragic.

But subsequent reporting revealed that in some of these cases other issues were a factor.  The "homeless deaths" headlines ignored other things that were going on in these lives apart from homelessness.

It does not lessen the tragedy.  But that is the reality.