Irish Finance Minister Paschal Donohoe said the budget will “build on progress that would have seemed impossible only a few short years ago.” 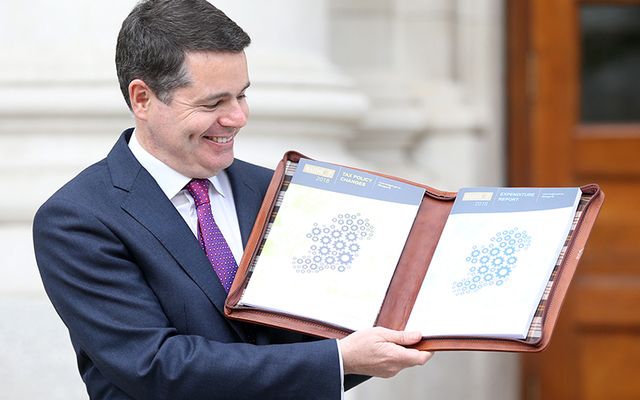 Finance Minister Pascal Donohoe with the 2018 budget on Tuesday.

The Irish budget for 2018 was announced yesterday by Irish Finance Minister Paschal Donohoe.

Irish Finance Minister Paschal Donohoe said his 2018 budget, announced on Tuesday, would “build on the progress that would have seemed impossible only a few short years ago.”

He said the budget would promote fairness and allow for sustained improvements in the standards of people’s lives.

Donohoe announced he would introduce a rainy day fund to deal with unforeseen threats to the economy.  It will be kicked off with €1.5 billion from the Ireland Strategic Investment Fund, which makes commercial investments with state finances, before annual payments of €500 million per year are made from 2019.

“This is another important step in strengthening the national finances in a changing and risky world, especially in light of Brexit,” Donohoe said.

The minister told TDs that he has approved an extra €1.83 billion spending on dealing with the Republic's housing and homeless crisis.  He said 3,800 new social housing units will be built next year and levies on vacant property sites would increase from two to six percent to deter land hoarding.

Donohoe added that funding for homeless services will be increased by a further €18 million to over €116 million to ensure that emergency accommodation and other supports are available.

Describing the state of the economy at the start of his speech, he said that, at 6.1 percent, unemployment was at the lowest point since 2008.  It was expected to fall to 5.7 percent next year, close to the level to be considered full employment.

The budget was part of a process that would help minimize the exposure of the Irish economy to outside risk, including events like Brexit and possible changes to U.S. trade policy.

It was a budget which would have a little for most people, but some critics reckoned it was spread too sparsely and there was still considerable underfunding in vital services, like the child and family care agency Tusla which is receiving an extra €40 million.

Brexit, Britain’s forthcoming exit from the EU, was given prominence with a €300 million a year income boost for farmers and small and medium enterprises.

Tourism interests welcomed the retention of VAT hospitality taxes at nine percent, despite some opposition demands for it to be increased to 13.5 percent.

In addition to Brexit concerns, Donohoe also highlighted U.S. tax reforms as examples of “external forces” being crises the state must weather.

“Our deficit is still too high. We cannot ignore what it will mean for future generations. This is why careful budgeting is now so important,” he said.

Total expenditure next year will be €60.9 billion.  There will be facilities for an extra 1,300 teaching posts, inputting an extra €10 billion into education, and 800 additional gardai.

There will be a €5 increase in all weekly social welfare payments, including the state pension. This will kick in at the end of March 2018.

The Christmas bonus payment of 85 percent will again be paid to all social welfare recipients in 2017. Cigarettes will increase by 50 cents bringing them to €12 for a pack of 20.

A sugar drinks tax has been introduced, in line with upcoming practices in the U.K., in a bid to combat obesity.

Donohoe aid spending on health is already at record level “But I know that our health service needs improvement,” he added, before announcing an increase in funding for the Health Department of €685 million. This brings the total department budget to €15.3 billion. There is to be 1,800 more staff across the health sector.

What did you make of the 2018 Irish budget? Let us know your thoughts in the comments section below.