For the first time since Sinn Féin entered Irish Parliament in 1997, they have been voted the most popular political party in the latest poll, ahead of the Irish general election. 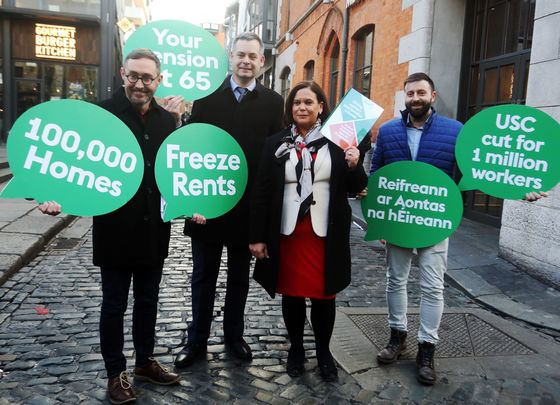 For the first time since Sinn Féin entered Irish Parliament in 1997, they have been voted the most popular political party in the latest poll, ahead of the Irish general election.

The Irish political party, Sinn Féin has taken a shock lead in the latest opinion poll ahead of Ireland's general election on Saturday, Feb 8, 2020.

The latest poll, released by the Irish Times/Ipsos MRBI, shows Sinn Féin at 25 percent, with Fianna Fáil close behind at 23 percent and the current ruling party Fine Gael in third at 20 percent.

Read more: Ireland's General Election 2020: who would you vote for?

Sinn Féin has garnered support over the last few weeks as voters appear to be turning away from the two main centrist parties, Fine Gael and Fianna Fáil, which have dominated Irish politics since the founding of the Irish state. Sinn Fein has capitalized on this promising a radical break from the status quo and vowing to return the pension age to 65

So far, the election campaigning has been dominated by the Irish housing crisis and the chaos of the health sector.

Since October 2019, Sinn Féin's popularity has risen by 11 points in the polls.

With just four days to go to the general elections, it looks like Fine Gael, led by Leo Varadkar could lose power. They have fallen by nine points since October.

Until now both Fine Gael and the Fianna Fail have both refused to go into government with Sinn Féin.

Until the mid-1990s members of the Sinn Féin party were banned from speaking on Irish media due to their links to the Troubles in Northern Ireland. Now after three decades, they are part of a power-sharing government in Northern Ireland. Ultimately, however, they want a united Ireland.

Sinn Féin has said it will not go into a coalition government without a commitment to immediately start planning for a referendum on the unification of Ireland, a vote it would push to be held within five years.

The President of Sinn Féin also received a boost on Monday evening when Ireland's state broadcaster, RTE, agreed that she would be welcomed to the political party leaders debate on Tuesday, alongside Fianna Fáil's Michel Martin and Fine Gael's Leo Varadkar.

Read more: The good and bad - Canvassing with Fine Gael ahead of Ireland's General Election 2020