Robinson, a former UN High Commissioner for Human Rights, was photographed having lunch with the princess, 33-year-old Sheika Latifa, in the United Arab Emirate of Dubai just before Christmas. 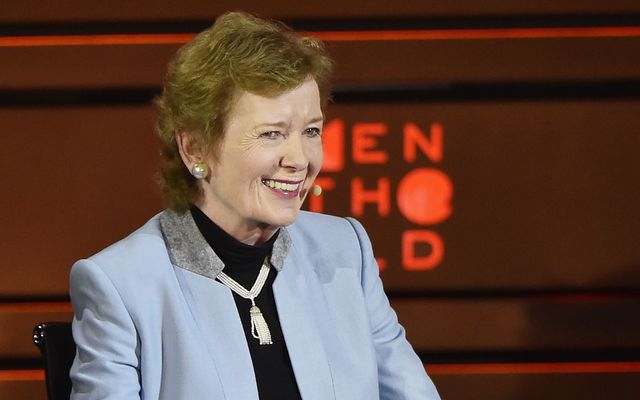 Amnesty International Ireland has supported calls by lawyers for Princess Sheikha Latifa for an independent delegation to be sent to Dubai to investigate her conditions.

Such a move could establish “if she is being detained against her will,” according to the organization’s executive director Colm O’Gorman.

He spoke out after former Irish President Mary Robinson angrily rejected claims that she was used as a willing pawn in a PR battle by the royal family ruling Dubai which is denying it foiled an escape bid by the princess.

Robinson, a former UN High Commissioner for Human Rights, was photographed having lunch with the princess, 33-year-old Sheika Latifa, in the United Arab Emirate of Dubai just before Christmas, nine months after she was last seen by friends aboard a yacht off the coast of India.

Lawyers for Sheikha Latifa bint Mohammed Al Maktoum believe that Mary Robinson’s comments that she was safe with her family are wrong https://t.co/bPOYu1nOjh

The princess claimed she had been living in a gilded prison and was attempting to escape and seek political asylum at the U.S. Embassy in India when she was snatched off the yacht by UAE special forces and Indian authorities last March.

She wasn’t seen or even publicly heard of again until photographs of her and Robinson were released by the royal family ruling Dubai on Christmas Eve.

An interview given to BBC Radio 4 two days later by Robinson when she described Princess Latifa as a troubled young woman raised a furious backlash among concerned human rights campaigners.

They were aware of Latifa’s escape bid from a pre-recorded video she made and which was shown recently in a BBC documentary. The video, in which Latifa said she was planning her getaway for seven years, was released by friends when her escape bid was foiled.

Following the controversy over Robinson’s interview with the BBC, she released another statement on Friday expressing dismay at the reaction and giving assurance that she acted in the best interests of the princess.

Mary Robinson says UAE Princess Latifa is "troubled," suggesting a pre-existing condition though I'd be troubled too if I tried to escape a gilded prison and was kidnapped back. Would Robinson know the difference? Of course family doesn't want "publicity." https://t.co/hiPK3xOJqw pic.twitter.com/jkpzEGgTW2

In her statement, Robinson said, “I am dismayed at some of the media comments on my visit and I would like to say I undertook the visit and made an assessment, not a judgment, based on personal witness, in good faith and to the best of my ability.”

Robinson said she visited Dubai to meet the princess at the request of Princess Haya bint Hussein, one of the six wives of the ruling Sheikh Mohammed bin Rashid Al Maktoum, Latifa’s father.

She had known Princess Haya for many years and was aware of the international concern over Latifa and that she had not been seen for many months.

Photographs of Robinson taken during a two-hour lunch with the princess were released to rebut what the Dubai family described as “false allegations” that she was taken home against her will.

Robinson described Latifa as a very likable young woman but who was “vulnerable” and “troubled” and undergoing psychiatric treatment and was clearly in need of the medical care she was now receiving.

Radha Stirling, chief executive of the Detained in Dubai group and a critic of the Robinson visit, said listeners to the interview with the former president would have been “astonished at the extent to which Mrs. Robinson appeared to be reciting almost verbatim from Dubai’s script.”