“You can only ask so many times . . . He said he absolutely did not meddle in our election. He did not do what they are saying he did." 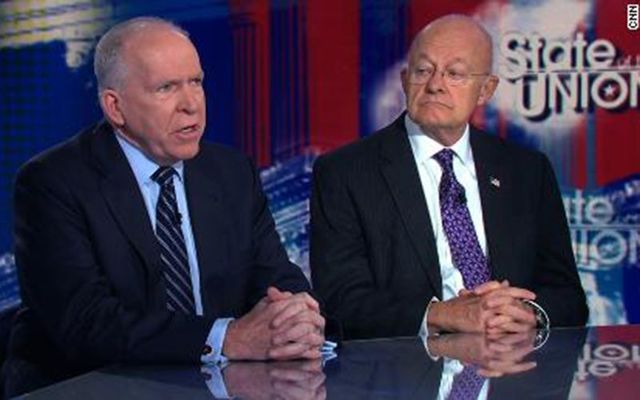 Brennan and James Clapper, former Director of National Intelligence, were responding to Trump’s remarks in Asia where he said he believed Putin when the Russian leader stated he had not tried to interfere in the 2016 election in the US.

“I asked him again,” Trump said after speaking with Putin in Danang, Vietnam, where they were both at a conference. “You can only ask so many times . . . He said he absolutely did not meddle in our election. He did not do what they are saying he did.

“I really believe that when he tells me that, he means it . . . I think he’s very insulted, if you want to know the truth."

Brennan utterly dismissed Trump’s assessment. “I don’t know why the ambiguity about this,” Brennan said. “Putin is committed to undermining our system, our democracy and our whole process. And to try paint it in any other way is, I think, astounding, and, in fact, poses a peril to this country.

Read More: Unraveling of Trump team is near as Russia connections become clear

“By not confronting the issue directly and not acknowledging to Putin that we know you’re responsible for this, I think he’s giving Putin a pass,” Irish American Brennan said on CNN’s 'State of the Union.' “I think it demonstrates to Mr. Putin that Donald Trump can be played by foreign leaders who are going to appeal to his ego and try to play upon his insecurities, which is very, very worrisome from a national security standpoint.”

When will all the haters and fools out there realize that having a good relationship with Russia is a good thing, not a bad thing. There always playing politics - bad for our country. I want to solve North Korea, Syria, Ukraine, terrorism, and Russia can greatly help!

“He seems very susceptible to rolling out the red carpet and honor guards and all the trappings and pomp and circumstance that come with the office, and I think that appeals to him, and I think it plays to his insecurities.”

Trump attacked Brennan and Clapper in earlier remarks saying they were just “political hacks.” Brennan said Sunday that he considers Trump’s characterization “a badge of honor.”

Even Trump’s own CIA director says Russia interfered. In a statement the CIA said, "The Director stands by and has always stood by the January 2017 Intelligence Community Assessment entitled: Assessing Russian Activities and Intentions in Recent U.S. Elections,... the intelligence assessment with regard to Russian election meddling has not changed."