Britain’s immigration authorities told couple she must file an application as a British citizen. 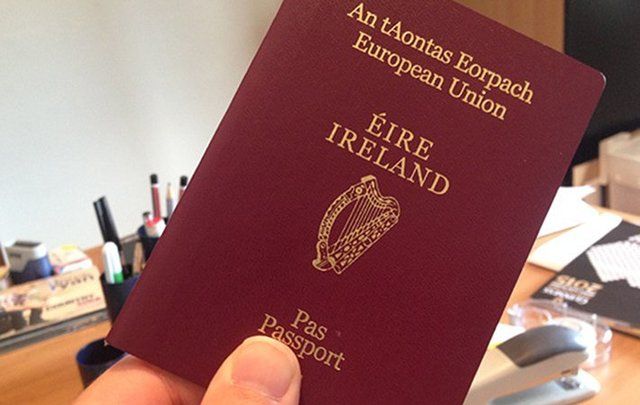 Britain’s immigration authorities told couple she must file an application as a British citizen. Irish Echo

A woman in Northern Ireland is furious that her American husband’s application for a UK visa has stalled after she refused to describe herself as British.

County Derry-born Emma DeSouza is a dual citizen, entitled under the Irish Constitution and the British Nationality Act 1981 to passports from both countries.

Under the Good Friday Agreement, people in Northern Ireland have the right to “identify themselves and be accepted as Irish or British, or both.”

However, the UK Home Office, which handles immigration matters, now says DeSouza must describe herself as British if she wishes her application to continue.

That or she can renounce her British nationality and submit as an Irish citizen.

##Derry woman claims US-born husband is 'hostage' in north because she won't call herself British via @irish_news https://t.co/HwhG04vnjb

Neither of these choices appeal to DeSouza who told the Irish News, “I refuse to claim British citizenship as I was born in Ireland and I am Irish.”

“I have been told by the UK Home Office that if I am to be considered Irish only then I would have to renounce British citizenship. However, to do this you have to first declare that you are in fact British but no longer wish to be. I never was British and under the terms of the Good Friday Agreement I am Irish, as it allows people from the North to be British, Irish or both.

“I have nothing against other people’s Britishness and I respect their right to it but I resent being told that I am British when I’m not.”

Her husband Jake works as a musician but surrendered his American passport as part of the application process and, as such, has been unable to travel for work.

The couple’s income has been drastically slashed and he has missed the funerals of two uncles because of the stalled application.

“He is essentially being held hostage here until I ‘admit’ to being British – it’s incredibly frustrating,” DeSouza vented.

An appeal to a tribunal has been filed but experts expect the process to be long and frustrating.

“This is a process that might take many more years, but I am not being forced to be British when it is not who I am.”

Claire Hanna, an elected member of the Northern Ireland Assembly from the nationalist Social Democratic and Labour Party, said that decisions made by the Home Office – run until last year by current Prime Minister Theresa May – were often overturned in court.

“It’s worth noting that a large percentage of such appeals against the Home Office are successful. If any other organ of the state got it wrong to this degree, surely something would be done to remedy the situation.”

“It is wrong that this couple has to put their lives on hold to deal with this massive uncertainty,” she added.“The Home Office appears to not understand – or is ignoring – the set of laws pertaining to the Good Friday Agreement that assures this individual’s right to an Irish identity.”

The refusal to accept a British identity has caused problems for nationalists in Northern Ireland for generations.

Famously, in 2006, soccer bosses at FIFA ruled that anyone chosen to play for the Northern Ireland team must carry a British passport, sparking outrage.

"FIFA sees no alternative but to require players to hold the passport of the national association they are seeking to represent in order to allow the match commissioner to verify their eligibility," the organization said at the time."The fact that a player holds an Irish Republic passport does not demonstrate conclusively that he or she is eligible to play for Northern Ireland."

Lobbying from politicians in Belfast, Dublin and London led to a screeching u-turn and was hailed by the British Government at the time as “clearly a victory for common sense” in light of the “fundamental” right of people in Northern Ireland to describe themselves as Irish.