Irish American Congressman attempted to explain why attacks by white supremacists had not been added to President Trump’s list of 78 attacks. 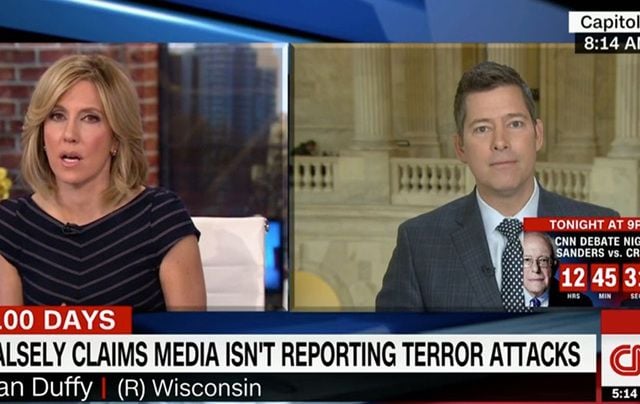 During an interview with CNN on Tuesday, the Irish American Congressman attempted to explain why attacks by white supremacists had not been added to President Trump’s list of 78 attacks his administration thinks have not been adequately covered  by the media.

But the glaring omission of our home grown domestic terrorists, the majority of which are self described white nationalists, perplexed CNN’s Alisyn Camerota.

“Why isn’t the president talking about the white terrorists who mowed down six Muslims praying at their mosque?” Camerota asked Duffy.

“I don’t know, but I would just tell you there’s a difference,” Duffy replied. “You don’t have a group like ISIS or Al Qaeda that is inspiring attacks around the world. That was a one off, Alisyn.”

The problem is, it wasn’t a one off and we do have white nationalists groups inspiring attacks on our home soil.

Each time a white supremacist goes on a killing spree they are invariably referred to by the media as a “lone wolf” who “acted independently” as though they weren’t aware of - or were even a part of - a national and international neo-Nazi network.

“So you give me two examples, right,” said Duffy, reluctantly admitting the recent attack on a mosque was more than a one off. “And in recent times, we’re going to talk about the one example. That’s different than the whole movement that has taken place through ISIS and inspired attacks.”

How it was different Duffy failed to clarity. Tell that to the bereaved, however.

Statistics simply don’t bear Duffy’s contention out. Since 9/11, according to The New York Times, an average of nine American Muslims per year have been involved in an average of six terrorism-related plots against targets in the United States.

Most of those plots were disrupted after tip offs from within their own communities, and the 20 plots that were carried out have accounted for 50 fatalities over the past 13 and a half years.

In contrast white nationalists have averaged 337 attacks per year in the decade after 9/11, causing a total of 254 fatalities, according to a study by Arie Perliger a professor at the United States Military Academy’s Combating Terrorism Center.

In fact the numbers of white nationalist attacks have only increased since the study was released in 2012. So it’s remarkable, given these easy to verify findings, to hear a United States Congressman contend that we face a special threat from Muslims when the facts say otherwise.

U.S. law enforcement also says otherwise. In 2014 law enforcement officers determined the “sovereign citizen” movement - an offshoot of the white-supremacist movement – is actually the most pressing terrorist threat in the United States.

So given what our security experts say, it’s time for Congressman Duffy to clarify exactly what the “difference” between competing sets of radical terrorists is?