Bob Geldof hands back his Freedom of the City of Dublin as the award is shared with Burma's Aung San Suu Kyi, accused of ethnic cleansing. 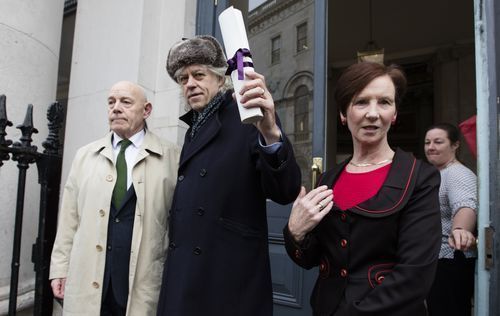 Bob Geldof with the Freedom of Dublin. RollingNews.ie

Bob Geldof has handed back an honor from the city of Dublin as a protest to sharing the award with Burmese/Myanmar leader Aung San Suu Kyi.

Suu Kyi became the East Asian nation’s State Counsellor (de facto Prime Minister) in 2016 and is a former political prisoner and winner of the Nobel Peace Prize, once feted around the world as Burma’s answer to Mandela.

However, the sheen has come off her once unblemished international reputation after her refusal to condemn the treatment of the Rohingya Muslim minority by her country's military.

The Rohingya have resided in Burma for over a thousand years but are not citizens: instead they are stateless, regarded only as “resident foreigners,” have few civil or democratic rights, and have been described as "the most persecuted minority in the world."

Read More: Burma's Aung San Suu Kyi to get Freedom of the City of Dublin award

In what the UN has described as a “a textbook example of ethnic cleansing” the military has burnt villages to the ground, raped women and shot those who fled.

Over 600,000 Rohingya have left Burma for neighboring Bangladesh but a Government review concluded, "Security forces did not commit shooting at innocent villagers and sexual violence and rape cases against women. They did not arrest, beat and kill the villagers."

The violence, they said, was the fault of the Arakan Rohingya Salvation Army (ASRA) which they say is a terrorist group – something ASRA denies, countering that its only goal is to "defend, salvage and protect” the Rohingya.

Suu Kyi says the reports are a “mix of untruths and victim-blaming”.

“We have to make sure those allegations are based on solid evidence before we take action,” she concluded in a speech in September.

And so, tailed by a bank of cameras, journalists and photographers, Geldof marched into Dublin City Hall to hand back his Freedom of the City award, brandishing the scroll of paper aloft for all to see.

“I don’t want to give this up, I’m really proud of it, you know? And you know I get handed things by states and cities around the world, but I’m a Dub and this meant very much to me. I don’t want to do it, but it’s the most I can do and the least,” he informed onlookers.

“Aung San Suu Kyi was extravagantly welcomed to this city and I was a participant to that and it turned out that she’s a killer, and I don’t want to be on the same list as what the UN described as a genocide.

“In short, I do not wish to be associated in any way with an individual currently engaged in the mass ethnic cleansing of the Rohingya people of northwest Burma.

“And perhaps she should appear at the Hague tribunal. Dublin should not have any truck with this woman. She’s let us Dubliners down and she’s let Ireland down, because we thought she was one thing and we’ve been duped. She’s a murderer.”

However, the return of the award did not please Dublin’s Lord Mayor, Mícheál Mac Donncha of Sinn Féin.

He said that the singer was “entitled” to return the honor but added that, “I find it ironic that he makes this gesture while proudly retaining his title as Knight Commander of the Order of the British Empire, given the shameful record of British imperialism across the globe.”

Geldof received a knighthood from Queen Elizabeth in 1986 for his charity work in Africa but as he is not a citizen of a Commonwealth Realm (i.e. a country where the Queen is still Head of State, such as Canada) the award is honorary and he cannot be addressed as ‘Sir Bob.’

“Mr Geldof last year grossly insulted the men and women of the 1916 Rising in the centenary year when he compared them to so-called Islamic State, causing offense to Dubliners and Irish people generally,” Mac Donncha continued.

Geldof, however, laughed off the criticism, telling RTÉ Radio that it was, “typical Sinn Féin nonsense.”

“I wish they’d focus on the problems to hand and the issues to hand rather than going back 100 years to some non-sequitur that has nothing to do with Aung San Suu Kyi,” he continued.

Another councillor, Mannix Flynn, later blasted the Lord Mayor’s remark as hypocritical, “He actually wears a chain around his neck which depicts William of Orange... if he’s talking about hypocrisy and he’s talking about ironic gestures, he needs to look at his own particular office.”

Yesterday Flynn proposed a motion to strip Suu Kyi of the honor but it was defeated.

“The issue has gone worldwide now and it’s high time for Dublin city council to debate it. If people given this honor are in breach of its principles, we should be able to rescind it,” he told The Times before the vote.

Other institutions have moved to strip Suu Kyi of honors: earlier this month Oxford City Council backed a motion to revoke her Freedom of the City and St Hugh’s College, Oxford – where the leader studied – has taken down a portrait of her.

Should Suu Kyi lose the Freedom of the City of Dublin? Was Bob Geldof right in his protest? Let us know your thoughts in the comments section, below.