After the Kabul bombings, President Biden labeled the deceased American service members as "heroes" and described the military as "the backbone of America". 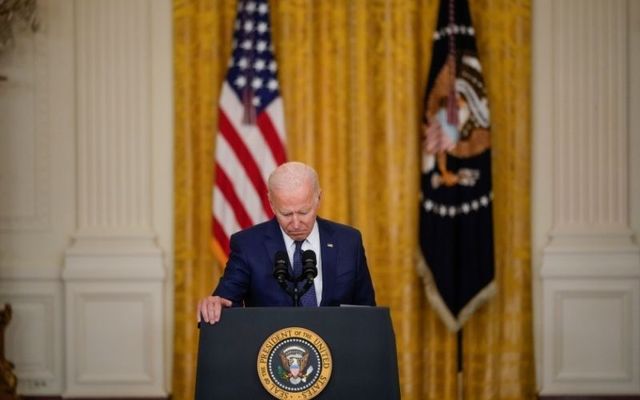 Joe Biden pauses to reflect during an emotional address on Thursday. Getty

US President Joe Biden has vowed to "hunt down" the terrorists responsible for three separate bombings that killed 13 American troops and dozens of civilians in Kabul on Thursday.

In a live address from the White House later in the day on Thursday, Biden labeled the deceased American soldiers as "heroes" and described the military as "the backbone of America".

He also issued a warning to the terrorists who carried out the three separate bombings near Kabul International Airport and said that he has instructed his generals to draw up plans to strike ISIS-K leadership and assets.

A downbeat Biden admitted that it had been a "tough day" but said that the US would not be intimidated by terrorists.

He also vowed that the evacuation of US citizens from Afghanistan would continue.

You can watch President Biden's address from August 26 here:

There are roughly 1,000 US citizens still to be evacuated from the country, US officials confirmed.

More than 100 people, including 13 US soldiers and 28 Taliban members, were killed in three separate suicide bombings in Kabul on Thursday, US officials confirmed.

US forces are braced for further terror attacks, including the possibility of rockets or vehicle-borne bombs being used to target Kabul International Airport.

Head of US Central Command General Frank McKenzie said that US forces were doing everything they can to be prepared for further attacks.

US officials blamed the so-called Islamic State for the attack and said that the group was targetting "translators and collaborators with the American army".

A US Central Command spokesperson confirmed that a further 18 soldiers were wounded on Thursday.

General McKenzie said that some intelligence was being shared with the Taliban and that some terrorist attacks may have been "thwarted" by Taliban forces.

A Taliban official said that the group was not responsible for the attacks or the "chaotic evacuation plan provided by foreign nations".

"We have lost more people than the Americans in the airport blast," the official said.

The Taliban is also set to tighten security around Kabul International Airport, according to a NATO diplomat.

Biden additionally said in Thursday's address that there was "no evidence" to suggest that the Taliban had colluded with ISIS forces.

"There is no evidence thus far that I’ve been given as a consequence by any of the commanders in the field that there has been collusion between the Taliban and ISIS in carrying out what happened today," Biden said.

A total of 36 Irish citizens were evacuated from Afghanistan since the Taliban took control of Kabul on August 15.