Is this the sign we've been waiting for that Beto O'Rourke will run in 2020?

The Irish American says he has made a decision on whether to add his name to the expanding list of Democrats but has given no clue as to if, or when, he will announce his candidacy bid. 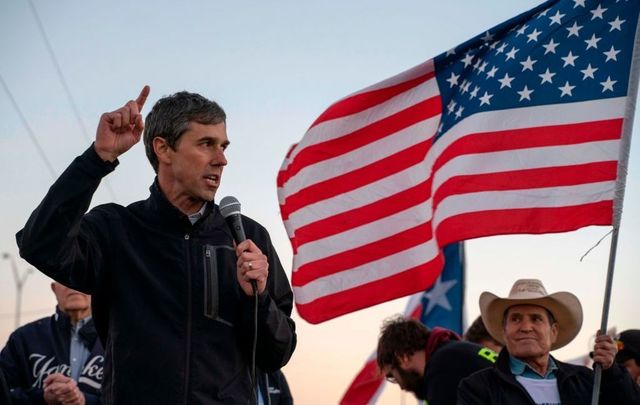 Former Texas Congressman Beto O'Rourke speaks to a crowd of marchers during the anti-Trump 'March for Truth' in El Paso, Texas, on February 11, 2019. PAUL RATJE/AFP/Getty Images

The Irish American says he has made a decision on whether to add his name to the expanding list of Democrats but has given no clue as to if, or when, he will announce his candidacy bid.

Is former Texas Congressman Beto O'Rourke running for the Presidency in 2020? Well, America must wait longer to find out but the Irish-American Democrat has revealed that he has made up his mind either way, even if he is yet to share that decision with the rest of the United States.

“Amy and I have made a decision about how we can best serve our country,” O'Rourke said Wednesday, referencing his wife, Amy Sanders.

“We are excited to share it with everyone soon.”

O'Rourke, who ran a strong challenge against Texan Senator and 2016 Presidential Republican contender Ted Cruz in the conservative state in the 2018 midterms, has been stringing along both his supporters and other Democratic hopefuls for some months now as he chronicles his journeys across the United States on social media.

As some urge him to use the same tactics in 2020 as he did in his narrow loss to Cruz last year for a further Senate run-off—this time for the seat of Republican Senator John Cornyn—O'Rourke himself has given no hint as to what his final decision may be.

On Wednesday, however, The Dallas Morning News reported that anonymous sources “close to the former El Paso congressman” allege the 46-year-old has decided not to run against Cornyn in the Senate, suggesting he may be widening his horizons to the Oval Office.

His spokesperson Chris Evans has not commented on the Morning News reveal.

As reported by IrishCentral earlier this week, another prominent Irish American politician, Joe Biden—whom many believe to be the frontrunner and the only Democrat to prevent Trump from winning a second term—has also been slow to outline whether or not he will run in 2020.

It is thought that recent family scandals could prevent Biden from making another attempt at winning the Oval Office, with fears that President Trump would exploit Biden's personal tragedies as part of his reelection campaign.

The former Vice President has been out in front in early polling of the Democratic runners, with O'Rourke originally placing in third (behind Biden and Bernie Sanders, who entered the race last week) before being surpassed by Senators Kamala Harris and Elizabeth Warren in recent weeks, both of whom are already on the campaign trail.

Do you think that O'Rourke should run for the Presidency? Who do you think is the frontrunner so far? Let us know your thoughts in the comments section, below.

Read more: This is the candidate Donald Trump most fears in 2020