President Trump's former Chief Strategist Steve Bannon thinks Trump will be ousted by the 25th amendment, which was drafted by the son of Irish immigrants. 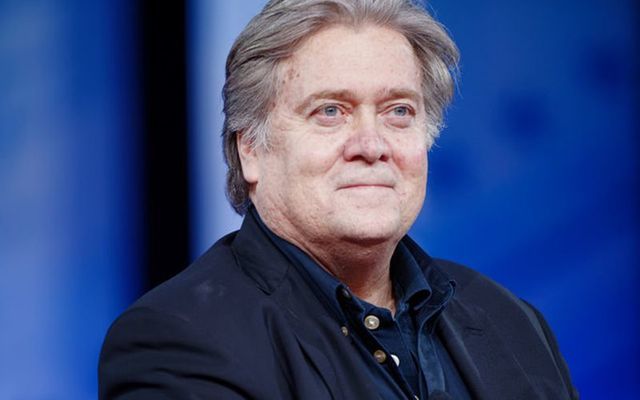 Steve Bannon thinks it's the 25th amendment that will eventually catch up with Trump. Michael Vadon / Flickr

Steve Bannon, Trump's former Chief Strategist, thinks that it's the 25th amendment that will finally catch up with his former boss and see him on his way out of the White House.

An explosive new book about Trump's first year in office quotes Bannon – once Trump's pet advisor before exiting the White House in August – as calling the odds on whether Trump will be able to complete a four-year term as president.

The 25th amendment has been raised in connection with Trump's mental fitness to serve as president, with Democrats and Republicans alike calling for an examination of his mental health after his recent tweet taunting North Korea leader Kim Jong Un about the size of his "nuclear button."

North Korean Leader Kim Jong Un just stated that the “Nuclear Button is on his desk at all times.” Will someone from his depleted and food starved regime please inform him that I too have a Nuclear Button, but it is a much bigger & more powerful one than his, and my Button works!

So, what is the 25th amendment, how does it work, and where did it come from?

The amendment was written by Professor John Feerick, a highly respected lawyer and the former Dean of Fordham Law school. Feerick is the son of Mary Boyle, who arrived from Mayo in 1928, and John Feerick, who arrived in the US a year later. They were each looking to escape the poverty of the Mayo farmlands, and had the fortune to meet each other in a dance hall on the other side of the Atlantic.

One week before the Kennedy assassination in November 1963 Feerick had written a scholarly essay on presidential succession. When Kennedy died and it became apparent there was no provision for a Vice President, Feerick’s article became the focus of legal scholars politicians and public alike.

So, in Trump's case, it would take VP Mike Pence and a majority of Trump's cabinet to set the amendment into motion.

This sounds highly unlikely, but the discord Wolff's book paints within the White House is significant if true.

“I trust @VP has asked his Counsel to prepare a draft document transferring power in accord with Sec. 4 of 25th Amendment in case it’s suddenly needed, & that he’s discussed this with COS Kelly.”

Most of @POTUS's craziness seems so far to have been confined to speech not deeds. But I trust @VP has asked his Counsel to prepare a draft document transferring power in accord with Sec. 4 of 25th Amendment in case it's suddenly needed, & that he's discussed this with COS Kelly.

Trump, however, turned the mental health line of questioning back on Steve Bannon, writing in a statement "When he was fired, he not only lost his job, he lost his mind."