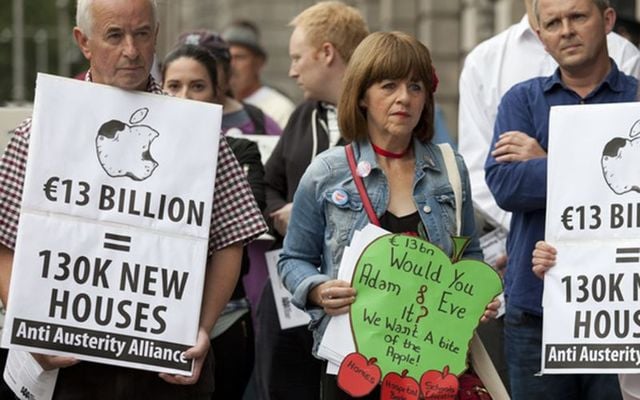 Protests have urged the Irish government to take the €13 billion in Apple taxes and use it for domestic spending. RollingNews.ie

The Apple Irish tax ruling means the tech company must start handing over the billions the European Commission deemed it owes Ireland.

The Irish government will start collecting the €13 billion ($15.4 billion) owed to them by tech giant Apple.

It claimed Apple had paid substantially less tax in Ireland than other businesses.

Ireland has been criticized by Brussels for not collecting the back taxes.

Dublin fears that if it does it may appear less attractive to multinational companies.

Ireland and Apple are appealing the European Commission’s ruling.

Ireland, however, is legally bound by the ruling, although the €13 billion will be held in a temporary escrow account until the conclusion of the appeals process.

Speaking in Brussels, Finance Minister Paschal Donohoe, said: “We have now reached agreement with Apple in relation to the principles and operation of the escrow fund.

“We expect the money will begin to be transmitted into the account from Apple across the first quarter of next year.”

The Irish Times has reported that Poland has sided against Ireland in the court appeal against the ruling that Apple owe €13 billion in taxes.

Read more: Irish Apple deal is rotten to the core

The paper reports that this may be an attempt by Poland to "curry favour with the commission.”

Taoiseach Leo Varadkar had described the decision as “wholly unnecessary and unwarranted at this time”.

He said: “It is our view that tax is a national competence, it’s a matter for this parliament, not a European matter.”

He added: “The NTMA [National Treasury Management Agency] is managing this process. They have tendered for fund managers to set up an escrow account and someone to manage the money until the European Court of Justice decides who it belongs to.”

* Originally published in the Irish Echo.