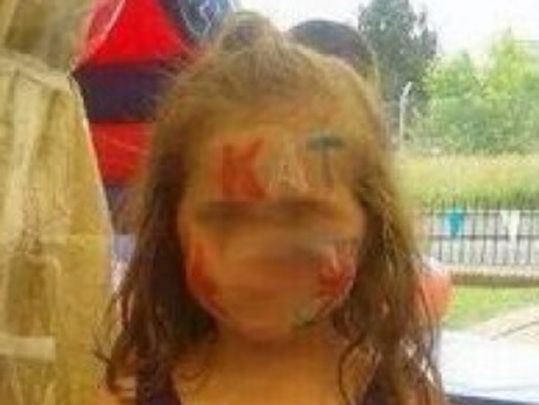 Police in Belfast are investigating a photo of a five-year-old girl with the sectarian acronym “KAT” (“Kill All Taigs,” a derogatory term for Irish Catholics) painted on her forehead.

The young girl is photographed with a Union flag painted on her cheek and “KAT” in red, white and blue on her head. The photograph, which emerged on social media and republican websites, is believed to have been taken during an Eleventh night bonfire in north Belfast.

The slogans “KAT” ("Kill All Taigs") or “ATAT” ("All Taigs Are Targets") commonly appear in graffiti in loyalist areas in Northern Ireland.

A Police Service of Northern Ireland (PSNI) spokesman added: "Police have received a report, enquiries will be carried out to establish if any offenses have been committed."

The child’s mother was not at the party when this incident occurred. She told the Irish News the children were painting the slogan on each other.

She told the Belfast newspaper, “The kids got the paints and wrote on it.

"They see it all the time sprayed all over the walls in the area.

"I have friends and family from both sides of the community.

"I wasn't at the party, so I didn't know what was on her head until I finished work.

"If I'd been there the kids would not have it on their heads.

"It was kids messing about and you can tell by the way it is written.

"I asked her what it meant and she said 'kiss and tell' – she doesn't understand, God love her."

The mother added that the five-year-old’s grandparents are in a mixed marriage. She added, “It is a disgrace people are taking it upon themselves to put this on republican sites.

"It has gotten out of hand."

Naomi Long, Deputy Leader of the Alliance party said she finds the images “utterly depressing and shocking" and said it is a "sad indictment of our society."

She said, "To expose this young girl to this form of sectarianism and hatred is child abuse.

"It beggars belief that anybody would believe it is acceptable to write this message on a person's face, let alone a young child.

"Sadly, it isn't an isolated incident. We have previously seen children dressed in paramilitary garb posing with replica weapons, for example."

This is the not the first time this sectarian slogan popped up this weekend as Protestants celebrated the victory of Protestant king William of Orange over Catholic King James II at the Battle of the Boyne, in 1690.

On a bonfire at Anderson’s Crescent, in Limavady, Derry, a huge placard emblazoned “Kill All Taigs” was set to burn with election posters of Sinn Fein councillors Brenda Chivers and Rory Donaghey, and the SDLP's Alex Attwood. Police removed the posters.