The Ancient Order of Hibernians hosted a virtual forum to introduce their Plastic Justice Report on October 24 that featured Irish victims' families sharing their stories. 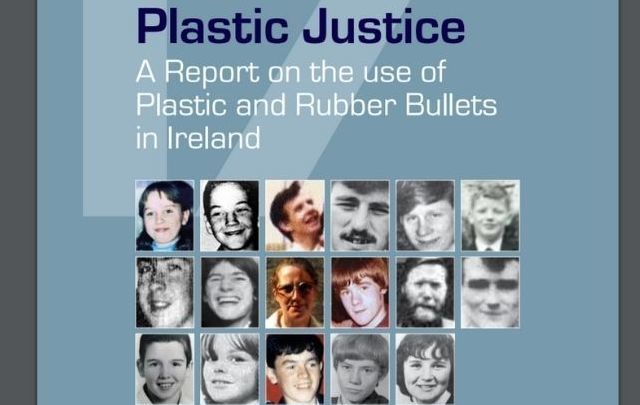 Almost 1,500 Hibernians, led by national presidents Danny O'Connell and Karen Keane, viewed the webinar broadcast launch of the report. The event made public newly uncovered British secret documents, written just before and after one of the killings, which will now be used by legal representatives of the Downes family in their court battle for an inquest.

You can watch the entire presentation and discussion here:

According to the AOH’s National Freedom for All Ireland Chairman Martin Galvin, "Relatives for Justice Director Mark Thompson introduced the groundbreaking report, which collected all information on plastic bullet murders in one document, and outlined how the British treated victims as criminals or rioters to justify murders and cover-up for killers. He hoped the report would reinvigorate the campaign for justice for all 17 victims, and had invited the Ancient Order of Hibernians and Ladies Ancient Order of Hibernians to co-host the launch because of their work in bringing legacy justice issues to Congress.

"Frances Meehan's older brother Michael Donnelly had been a 21-year-old college student, studying sociology and a volunteer social worker with youth programs. On Sunday, August 10, 1980, there had been rioting and plastic bullets fired, because of internment anniversary protests, and growing tension over the H-Block crisis in Long Kesh. Michael Donnelly did not know that plastic bullets had been fired earlier, as he walked to his parents’ home.

Galvin adds, “Ms. Meehan said, ‘When the British Army or Royal Ulster Constabulary murder someone, they criminalize them to cover it up. Michael was called the ringleader of a riot.' Her father, a United States Army veteran, and mother spent years fighting to get the truth. Both had their lives cut short by grief and heartbreak. She said, 'Nothing will make our pain go away until we get the truth!’”

Said Galvin about other victims, “Mark Kelly described his sister Carol Ann Kelly as a 12-year-old girl who loved life, was always happy and loved singing and dancing.  May 1981 was a tense month in which Bobby Sands, Francis Hughes, Ray McCreesh, and Patsy O'Hara died on hunger strike. However, May 19 was a beautiful evening and many of the children from their street had gone outside to play.

"Mark, 13, saw his 12-year-old sister Carol Ann Kelly shot right outside their home. She had heard plastic bullets being fired and turned to come back inside when she was shot in the back. No crown investigator bothered to speak to him or any eyewitnesses.

“Instead, the next night British troopers fired plastic bullets into the windows of the Kelly home, then came inside and threatened the family. His father and mother were devastated and died without ever getting justice. Mark Kelly ended by holding up a photograph of Carol Ann smiling, then one of her lying in her coffin. He said that he would never forget Carol Ann or give up fighting for justice.

"Brenda Downes said on August 12, 1984, that she went to an internment day march with her husband John and baby daughter. Little did she know that she would come away and John would be dead.

"The march was peaceful, Gerry Adams had even asked the crowd to sit down in the streets to show there would be no violent resistance to the RUC. As soon as Martin Galvin was called to the platform, the RUC began an unprovoked and premeditated attack to punish the entire crowd. They killed John and injured many others.

"Worldwide publicity forced the British to appear to take action. Hegarty was cleared in a sham trial in which only pro-defense witnesses were called to testify. Brenda Downes was not told about the trial starting until reading it in a newspaper. John Downes' father was told there was no room for him in the courtroom.

Also at the event, Galvin said that two confidential documents were read out. “Both documents had been uncovered by Irish historian Robert Collins doing research at the Kew Archives Collins.

"Four days after the killing, British Home Office official Anthony Townsend ordered the Foreign and Commonwealth Office not to distribute film of the actual shooting, because the footage would 'inevitably increase the belief that a shoot-to-kill policy was in operation.'

“A second document records that three weeks before the killing eight British officials, including representatives of the Home Office, Northern Ireland Office, Republic of Ireland Office and Immigration Service met and ruled out banning a 130 member American delegation, but decided to use an Immigration Exclusion Order against me. They knew the order was illegal because of my dual citizenship and an Irish agreement with the United States. This means the entire attack on the rally and those like John Downes who attended was based on an illegal pretext.”

Galvin concluded, “The British government tries to dismiss demands for legacy justice with noble-sounding phrases like 'vexatious prosecutions' or 'pernicious counter-narratives.' In plainer English, they mean that if the truth emerges from genuine investigations, inquests or trials, it would destroy the myths and fairytales the British tell to justify their misdeeds.

“The AOH and LAOH feel privileged to be invited to be a part of this launch. This report and especially the voices of victims' relatives are an inspiration to us. We will stand behind them in their fight for legacy truth and justice."

You can view the entire Plastic Justice Report here.