People gathered in Phoenix Park on Thursday evening to protest vaccine certifications for indoor dining, a bill for which was passed in the Dáil on Wednesday. 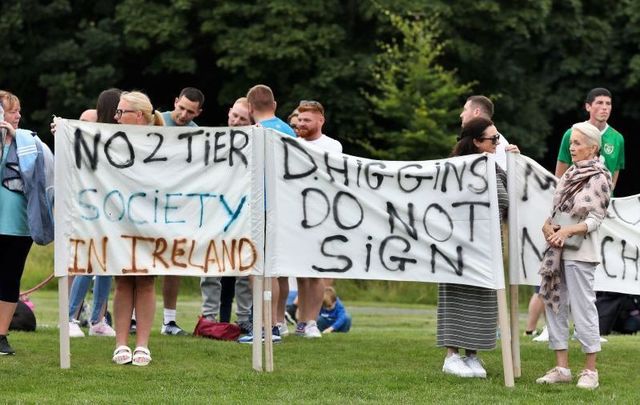 July 15, 2021: Protestors gather outside Áras an Uachtaráin, the residence of the President of Ireland, in Dublin's Phoenix Park. RollingNews.ie

Hundreds of anti-lockdown demonstrators gathered outside the residency of Irish President Michael D. Higgins in the Phoenix Park on Thursday night to protest against legislation that will allow only vaccinated people to dine indoors from the end of the month.

Protestors congregated at Áras an Uachtaráin at 7 pm on Thursday, with many carrying Irish tricolors, American flags, and anti-lockdown posters.

Earlier on Thursday, Tanáiste Leo Varadkar announced that indoor dining has a target return date of Monday, July 26 for people who have been fully vaccinated against COVID-19. Varadkar said that anyone wishing to dine indoors would have to produce a valid vaccination cert that is verified by publicans or restaurateurs.

The controversial legislation passed by a narrow margin of 74 votes to 68.

Protestors gathered outside Áras an Uachtaráin in the Phoenix Park, with many calling on President Higgins to refuse to sign the legislation into law.

People of all ages attended the demonstration, although the majority of protestors were young, according to the Irish Times.

Most demonstrators did not wear face masks or observe social distancing, while some protestors carried musical instruments and others chanted slogans or held placards.

Some placards included the phrase "we do not comply", while others claimed that the Irish Government's legislation was "medical apartheid"

One protestor described the Irish Government's proposal to let only vaccinated people dine indoors as "discriminatory" and "draconian".

Gardaí estimate over 1,000 people have gathered at a demonstration near Áras an Uachtaráin in Phoenix Park, to voice their opposition to Covid-19 regulations on vaccinations and hospitality | https://t.co/V9vabbEMDn pic.twitter.com/to4ddwHAQQ

Meanwhile, hundreds of demonstrators also gathered outside the Convention Centre on Wednesday night.

The Dáil is currently convening in the Convention Centre, prompting a significant number of anti-lockdown protestors to gather at the Docklands Venue at 9 p.m. on Wednesday. The group dispersed at about 1 a.m.

Gardaí arrested one woman in her 30s for public order offenses during Wednesday's protest. The woman has since been charged and released from custody and is due to appear before the Criminal Courts of Justice on an unconfirmed date.