Peter O’Neill became ill on a flight he was taking with his wife Cathie and suffered a stroke that caused him to lose all movement in his left side. 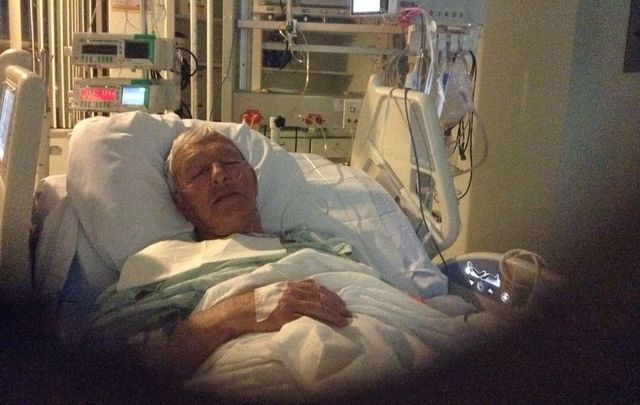 Peter O'Neill in hospital in the US. GoFundMe

A fundraising campaign has been set up for a Cork man after he suffered a stroke on a flight to Miami, where he was traveling to celebrate his 80th birthday and 50th wedding anniversary.

Peter O’Neill became ill on a flight he was taking with his wife Cathie and suffered a stroke that caused him to lose all movement in his left side.

O’Neill, who has four children and 13 grandchildren, is now medically stable according to his daughter Karen, but still retains no movement in the left-hand side of his body.

The family says that  O’Neill subsequently suffered from pneumonia and pulmonary edema while in Jackson Memorial Hospital.

Karen O’Neill told the Cork Echo that her father’s illness has incurred great costs on the family because O’Neill’s insurance company have denied his claim.

Peter O'Neill with his wife Cathie.

“Unfortunately the insurance company that had provided a policy for Dad has declined his claim and will not cover any of his costs. This means that Dad is liable for all medical and travel costs,” said Karen O’Neill.

“My mother has had a tough few weeks, she came down with bronchitis and has been on antibiotics.”

Each of his four children has taken it in turns to go to Miami and support their parents and they have set up a GoFundMe to assist with getting their father home to Ireland.

A plan is in place to fly O’Neill home on Saturday first-class to Dublin and then to commence rehabilitation in Cork close to his home in Ballincollig.

Read more: Confirmed cases of measles in Ireland have grown by over 200 percent since 2017

In order to reduce risk of a second stroke on the flight home, O’Neill’s current neurologist has taken him off otherwise necessary medication.

“Dad will need medical assistance throughout the flight home, which means we have to arrange for a medical practitioner to fly to Miami and escort him home on the plane with all necessary medical equipment,” Karen O’Neill said.

“We want to thank everyone for their kindness, support and best wishes. We have been overwhelmed and humbled by the kindness we have been shown. It makes us feel very lucky as a family.”

To donate, visit the GoFundMe here.