A Boston Globe and Philadelphia Inquirer investigation finds that while US bishops promised reform, they not only failed to adequately respond to sexual misconduct but failed to oust other bishops guilty of abuse. 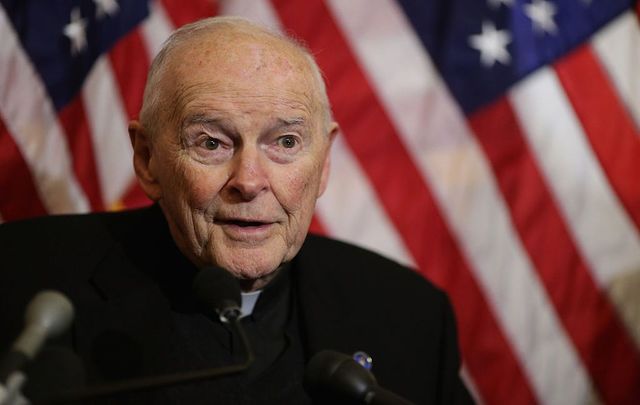 Cardinal Theodore McCarrick, archbishop emeritus of Washington, speaks during a news conference with senators and national religious leaders to respond to attempts at vilifying refugees and to call on lawmakers to engage in policymaking and not 'fear-mongering' at the U.S. Capitol December 8, 2015, in Washington, DC. Chip Somodevilla/Getty Images

A Boston Globe and Philadelphia Inquirer investigation finds that while US bishops promised reform, they not only failed to adequately respond to sexual misconduct but failed to oust other bishops guilty of abuse.

When US bishops gathered in Dallas in 2002, they promised major reform, after the clergy sex abuse scandal exploded in Boston and the Catholic Church in the United States found itself drowning in scandal.

While this historic meeting of bishops promised an end to the covering up and mishandling of allegations of clerical sex abuse, what they delivered was yet another decade and a half of misleading US Catholics and failing to adequately respond to accusations against both priests and themselves.

Read more: The MeToo of the Catholic Church - time to speak is now

Catholic bishops promised reform in sex-abuse scandal. But they didn't look at their own misdeeds. https://t.co/SjrJUT2sCT pic.twitter.com/JrBEvz7Yve

According to an investigation carried out by the Boston Globe and Philadelphia Inquirer, which delved into the court records, media reports, and interviews with church officials, victims, and attorneys, these bishops both enabled sexual misconduct of priests and were guilty of it themselves, even in the years following their public declaration of an end to concealment and cover-ups.

The investigation found that more than 130 US bishops - almost a  third of those still alive - had been accused of failing to adequately deal with allegations of misconduct, with 50 of these allegations being made regarding incidents that occurred after the bishops' 2002 gathering.

Wow, @PhillyInquirer & @BostonGlobe did joint investigation into US Catholic Bishops. This is just staggering:
One out of 3 living bishops has been accused of failing to adequately respond to sexual misconduct.https://t.co/eXnXQN2AbY

Not only this but at least 15 bishops were guilty of misconduct themselves, facing allegations of abuse or harassment.  Among those was Cardinal Theodore McCarrick, the former archbishop of Washington who resigned in July 2018.

At the 2002 meeting, the US bishops outlined new rules which would see hundreds of priests being removed for abusing minors and civilian review boards established to investigate clergy misconduct claims.

They contested, however, that the new standards could not hold them to account and each bishop could only answer to the Pope and not discipline each other.

The result has been that while priests are being held to account, their superiors are being spared from the backlash of the scandals.

While bishops have continued to face credible accusations, such as Bishop Richard Malone of Buffalo whose former assistant accused him of covering up abuse, the Globe examination reports that they have been allowed to slip quietly into retirement instead of facing up to their alleged actions.

“The bishops simply do not have anyone looking over their shoulder,’’ the Rev. John Bauer, a Minneapolis pastor, told the Globe. “Each bishop in his own diocese is pretty much king.”

During the next seven days, bishops across the U.S. will dedicate themselves to intensified prayer and fasting. We pray for victims of clergy sexual abuse, the conversion and just punishment of perpetrators and concealers of sexual abuse, and the strength to be holy shepherds. pic.twitter.com/xGvHLSWoU7

“This is the church’s #MeToo moment,” said Thomas Plante, a former lay adviser to the US Conference of Catholic Bishops. “Why should you trust church leadership if the rules don’t apply to them?”

What do you make of the report? Let us know your thoughts in the comments section, below.