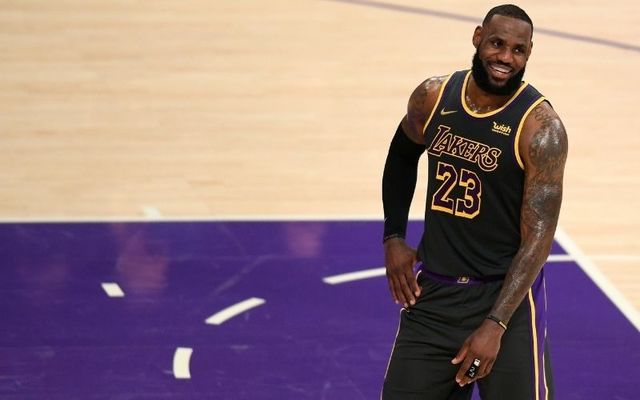 LeBron James during the Lakers' win over the Indiana Pacers in March. Getty

Jay Linneman, who owns Linnie's Pub in Delhi Township, Ohio, said that he would not display any NBA games at his bar until Black Lives Matter advocate LeBron James is banned from basketball, citing the LA Laker star's stance on the police shooting of Ma'Khia Bryant last week.

Jay Linneman, who owns Linnie's Pub in Delhi Township, Ohio, said that he would not display any NBA games at his bar until James is banned from basketball.

The Irish-American bar owner said that the decision relates to James's stance on political issues.

"They just need to play the game and that's it," Linneman told the Cincinnati Enquirer. "Their opinion doesn't really matter. They're using their position to push their opinions, and that's just not right."

Linneman posted the announcement shortly after James tweeted (and subsequently deleted) a post relating to the shooting of Ma'Khia Bryant - a 16-year-old black girl who was shot dead by a Columbus police officer last week.

"You’re next. #accountability," James wrote in the deleted tweet, which appeared alongside an image of a Columbus police officer.

The LA Lakers star faced significant backlash over the tweet, with many people pointing out that Bryant appeared to be holding a knife and that the police officer seemed to be preventing her from stabbing someone.

Linneman announced his decision to suspend all NBA games at his pub in a Facebook post last Wednesday.

"If anyone wants to watch an NBA game, don't come to Linnie's Pub," Linneman wrote on Facebook "We will not air them until Lebron James has been expelled from the NBA."

Linneman said that if high-ranking government officials like President Joe Biden had made such a comment, there would be calls for impeachment.

James later said that he deleted the tweet as it was being used to "create more hate" but insisted that he was still demanding police accountability.

"I’m so damn tired of seeing Black people killed by police. I took the tweet down because it's being used to create more hate -This isn’t about one officer.  it’s about the entire system and they always use our words to create more racism. I am so desperate for more ACCOUNTABILITY," he wrote in a subsequent tweet.

James also took to Twitter to react to Linneman's decision to ban all NBA games at his pub.

"Aww Damn! I was headed there to watch our game tonight and have a drink! Welp," he wrote in a tweet that has been liked more than 200,000 times.

Aww Damn! I was headed there to watch our game tonight and have a drink! Welp. 🥴 https://t.co/RRfRksjckM