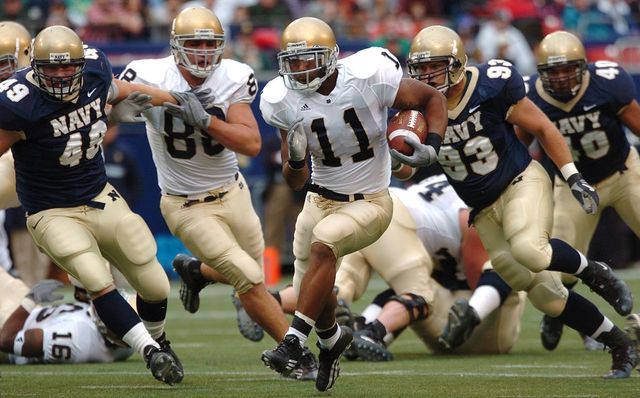 The University of Notre Dame in Indiana has been told it should consider re-examining the sports team’s nickname of the Fighting Irish.

The killing of George Floyd has sparked renewed conversations around the issue of race in America, with many sponsors increasingly conscious of such concerns.

It’s also prompted a wider review of nicknames across the sport, with Notre Dame’s Fighting Irish one of several teams to come under the microscope.

Arguably the biggest and best supported intercollegiate football team in the world, with home games played in the 77,622-capacity Notre Dame Stadium and televised on NBC, discontent is growing among a small sub-section of fans.

It's being led by Irish American Notre Dame fan and Slap the Sign journalist Dan Morrison who asked readers if it’s time to reconsider the Fighting Irish nickname.

While Morrison admits that the nickname has helped give the team a strong cultural identity and nationwide following among the Irish American community, he believes it carries negative connotations.

“Unequivocally, the origins of the nickname stem from a desire to differentiate Notre Dame for its Catholicism,” he writes.

“It is a negative portrayal of Catholics and immigrants. It is a stereotype of the violent Irish. It’s just been spun into a positive over time.”

As a child with Irish heritage, Morrison never found it particularly offensive. However, now that he better understands the struggle and oppression faced by his forefathers, he sees it in a different light.

“When the Irish came to America, they were second class citizens. There were signs in windows that stated ‘No Irish. No dogs,’” he writes.

“This, their welcome to a nation with streets paved with gold, as they fled the genocide of Black 47. As they left an island stolen from them, a language eradicated, a culture razed they came to the United States and weren’t trusted for their religion.

Read more: Ruth Negga on being Black and Irish

Commenting on the ongoing debate, Neil Cosgrove, the Ancient Order of Hibernians National Antidefamation Chair, said "While not wishing to interject ourselves into the ongoing debate as regards sports team mascots, not presupposing to speak for other communities such as Native Americans, we must comment on recent attempts to draw into this controversy the University of Notre Dame mascot Leprechaun and the 'Fighting Irish' nickname.   We question both the accuracy, logic, and motivations behind such analogies.

"First, the Leprechaun is a mythical character, not a caricatured representation of a real person with a real history.   Second, while the precise origin of the nickname 'Fighting Irish' is a subject of debate, many sources attribute it to the conflicts between students of the University of Notre Dame and members of the Ku Klux Klan during a resurgence in anti-Catholic nativism after WW I which was coincident with the rise of the team to national prominence.   We would argue that there is no shame and much to be proud of in the appellation 'Fighting' if the cause is just.

"We would encourage those who wish to defend their heritage to tackle items such as Amazon's continued sale of "Irish Livers Matter" and other defaming merchandise, which has a clear, unambiguous message of defamation."

For the time being, they're planning on sticking to his own nickname for the team: The Irish. A name he believes celebrates Notre Dame’s cultural ties to the Irish diaspora without indulging in lazy, outdated stereotypes.