Irish people are most likely to see the natural phenomenon on Tuesday night. 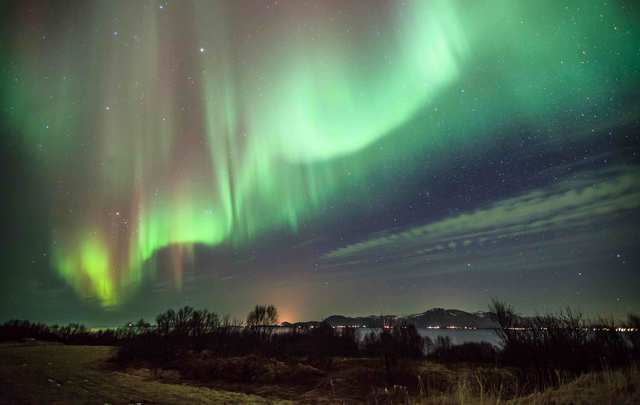 The Northern Lights will be visible over Ireland this week. iStock

Irish people will be able to glimpse the Northern Lights over the next few days, according to a prominent Irish astronomy group.

Astronomy Ireland says that the Aurora Borealis will be visible from all over Ireland later this week.

However, David Moore, editor of the Astronomy Ireland magazine and one of Ireland's best-known astronomers, said that the Northern Lights won't look like they do in pictures.

"You see the colors in photographs but to the naked eye unless it's a very strong display, you usually only see a greyish and whitish color in the sky," he told RTÉ's Morning Ireland.

He said that the Northern Lights were visible in some parts of the country on Sunday night and that anyone watching the news might have gotten a false impression since high-quality cameras captured the display.

"So people perhaps watching the 9 pm news last night and looking at the beautiful greens and pinks, color cameras are good at picking that up, but unless it's a major display its usually more of a whitish color."

The astronomer said that people in the north of the country will be slightly more likely to see the Northern Lights than people living elsewhere in the country. However, he said that it will be visible in all parts of the country.

"The North coast is slightly better favored, but people even in Kerry people shouldn't worry, Ireland is such a small island that it doesn't make much difference being on one end of this island to the other.

"The only advantage people on the North coast have is they're looking over the Atlantic ocean so there won't be any artificial lights in the distance that could trick you."

Moore said that the display could be a small one but advised star-gazers to look for a "glow in the north".

"This is not a huge storm that's expected, we never really know the intensity, so you might only be looking at a small glow on the northern horizon.

"We'll be seeing it from hundreds of kilometers away unless it moves very far south, which has happened in the past, so we can only hope for that, but look for a glow in the north, that's the tip."

People will be able to see the Aurora Borealis from dusk till dawn, Moore said, and he advised people to keep checking the skies.