Posters appeared in the Loyalist Moygashel/Dungannon Facebook group over the past 10 days as anti-racism protests continue to take place around the world. 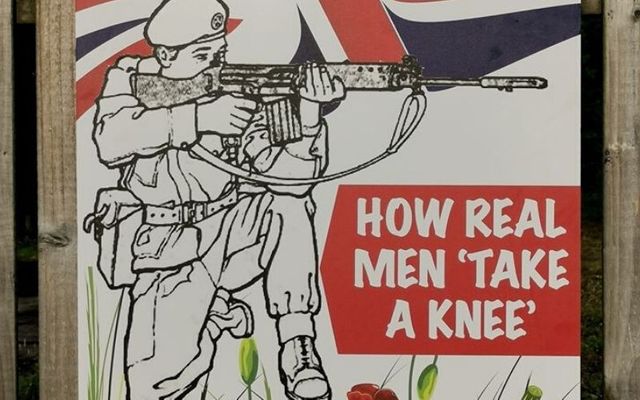 Loyalists in Co Tyrone have come under fire after they erected posters that appeared to dismiss the Black Lives Matter movement, with Northern Irish politicians claiming that they are racist and incitement to violence.

The posters appeared in the Loyalist Moygashel/Dungannon Facebook group over the past 10 days as anti-racism protests continue to take place around the world following the death of black man George Floyd in Minneapolis on May 25.

One poster featured a crouching soldier aiming a rifle alongside a British flag and the caption "How real men take a knee," which appears to ridicule Black Lives Matter advocates who have been dropping to one knee in silent protest recently.

The poster also included the slogan "British and proud."

Another poster included a Northern Irish flag and a caption claiming that "It isn't racist to protect your own community."

Sinn Féin's Linda Dillon, an MLA for mid-Ulster, said that the posters were "extremely offensive."

"At a time during the Covid-19 pandemic when all in our community are coming together to support each other you would have to wonder at the mindset of anyone who would erect racist and intimidating posters," she told the Ulster Herald.

SDLP Councilor Malachy Quinn also slammed the posters and said that anyone who supported them was on the "wrong side of history."

He said that the Black Lives Matter movement is not a threat to anybody or any community.

"If you find that a threat or offensive that says more about you and the people you hang about with than anybody else," he told the Irish News.

Bernadette McAliskey, who heads Dungannon's community development non-profit STEP, said that the posters were an incitement to hatred and called for them to be removed.

She urged the PSNI and the local council to take action and remove the posters.

Read more: On this day: Loyalist bombings in Dublin/Monaghan kill 34 in 1974