After two violent attacks in one week Republic leader says "the people on this island and of Northern Ireland want no more violence, they want politics to work." 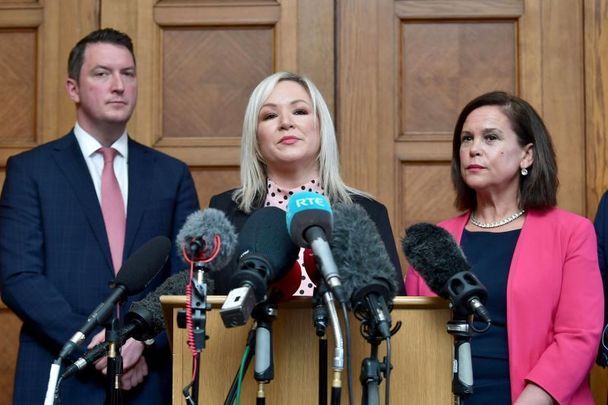 There has been resurged violence against police in Northern Ireland from splinter republican group the New IRA, which murdered campaigning journalist Lyra McKee in 2019.

Two attacks on police last weekend, one a deliberately organized bogus scare and the other a bomb attempt to kill two officers, followed a failed bid in April last year to kill another police officer and her daughter.

Last Friday a bomb detonated at the side of a police vehicle while the officers, who were uninjured, patrolled in Strabane, County Tyrone. Four people were released after questioning. A fifth suspect was still in custody on Tuesday.

On Sunday a delivery vehicle was hijacked and the driver was forced at gunpoint to drive with what looked like a car bomb to a police station in Derry.  Police later discovered it was an elaborate hoax with a fixed device meant to look like a car bomb.

It prompted a security alert which caused significant disruption to the area around Derry’s Waterside police station, with people forced to leave their homes, roads closed and a primary school unable to open for the day.

There was widespread condemnation from both sides of the border.

Taoiseach Micheal Martin said he would be “concerned” that there had been two such attacks within a week.

He said, “We have to be very, very clear that the people on this island and of Northern Ireland want no more violence, they want politics to work.

He added, “We condemn utterly anyone who is contemplating violence and anyone in a paramilitary organization that believes they have a right to impose such barbarity and violence on people.”

Northern Ireland’s first minister-designate, Sinn Fein Vice President Michelle O’Neill, said the reports from Derry were “extremely concerning” and that she had been in contact with the PSNI.

She described the outrages as more chaos and disruption for the local community, and added, “These people that reach for the past need to hear that it’s not available to them. We must all unite against these reckless actions.”

The attacks in Derry City and Strabane were suspected by detectives to have been carried out by the same group that attempted to kill a police officer and her young daughter by placing a bomb by her car in Dungiven, Co. Derry, in April of last year.

The New IRA has a long history of attacks on police targets and is the most active of the dissident republican groups in the northwest, The Irish Times reported. It was responsible for the murder of journalist McKee in the Creggan area of Derry in April 2019 when she stood near a police line during street rioting.

The paper reported that support for dissident republican groups is estimated to be in the hundreds, with a significantly smaller number, probably no more than 20 or 30 in the northwest, willing to actually engage in violence.

Chief Superintendent Nigel Goddard, the PSNI commander in Derry City and Strabane, said he has never been of the opinion that the New IRA has given up its actions in any way.