Tadhg O'Sullivan and his two sons Mark and Diarmuid were found dead in a suspected murder-suicide in Co Cork on October 26. 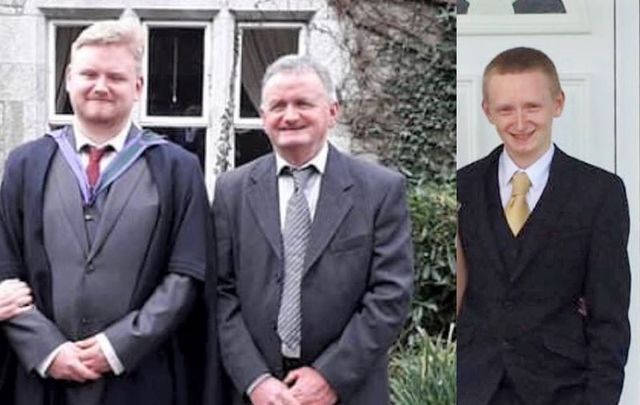 L-R: Mark O'Sullivan, Tadhg O'Sullivan, and Diarmuid O'Sullivan, who were all found dead at their family home in Co Cork on October 26. RollingNews.ie

A note reportedly found following the suspected murder-suicide of a father and his two sons outside of Kanturk in West Cork on Monday, October 26 suggests that two of the men may have plotted the tragic event.

*Update 1:40 pm EST: Gardai said in a recently-released statement: "The post mortem on all three of the deceased men has now been completed. The results of the post mortem have been given to investigating Gardaí, details of which will not be disclosed. A file will now be prepared for the Director of Public Prosecutions and the Coroner.

"No further details are available. Gardaí would once again like to remind members of the media of the request for privacy for the family involved."

*Earlier: The Irish Times reports that gardai who are investigating the tragedy are now considering whether or not it was planned in advance following the “discovery of a lengthy and detailed apparent suicide note on one of the deceased.”

Gardai have yet to formally name the three deceased men as the postmortem exams have not concluded, but they have been named locally as father Tadhg O'Sullivan, 59, and his two sons Mark, 26, and Diarmuid, 23.

The note, about a dozen pages in length, was reportedly found on the body of Diarmuid. It “suggested that both Diarmuid and his father had been planning to shoot Mark over a grievance that they had regarding a proposed will dividing up the family’s 115-acre farm,” according to The Irish Times.

Gardai reported on Monday, October 26 that the alarm had been raised at about 6:40 am that morning by a female in her 60s that a firearm had been discharged in her home in Assolas, Kanturk, Co Cork.

Gardai responded to the scene and at about 1 pm, the body of a male in his 20s, with a gunshot wound, was discovered in a bedroom of the house.

Later, at approximately 1:40 pm on Monday, two further bodies, a male in his late 50s and a male in his 20s, were discovered in adjoining lands. Preliminary indications indicate both bodies have gunshot wounds.

Two of the postmortem examinations have been completed, while the third is set to be completed today, October 28.

In an update issued on October 27, gardai said: "Contrary to some reports in the media, there had been no Garda interaction with the deceased men, or their family, prior to the tragic events of 26 October 2020."