Mary Donovan's sister Ann Veronica Finn died a day after she was born at the Bessborough mother and baby home in 1959, while her brother Joseph Vincent died a day later. No burial record exist for either baby. 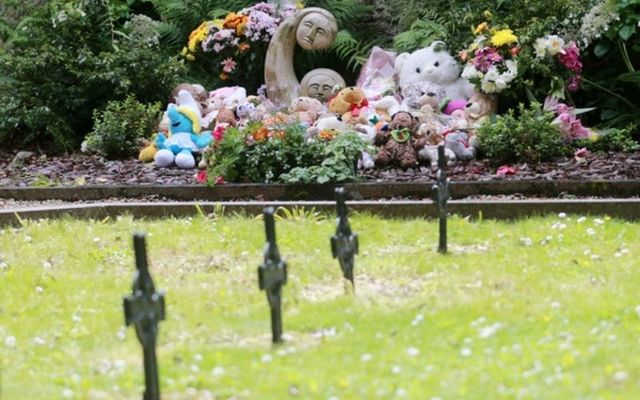 Children's teddy's and toys along with flowers sit at the 'Little Angels' memorial plot in the grounds of Bessborough House in Blackrock, Cork. Rolling News

The sister of twin babies who died at the Bessborough mother and baby home in County Cork 63 years ago has called for a full investigation into the home, stating that she is deeply concerned that no burial records exist for her siblings.

Ann Veronica died within a day after her birth, while Vincent Joseph died a day later. Both babies died of Atelectasis Prematurity, which causes a total or partial collapse of the lungs, at the nearby St. Finbarr's Hospital.

However, Mary Donovan said she is deeply concerned that no burial records exist for her siblings.

"My brother and sister would be 63, and I need to find them because if they are alive I need to know they’re okay, and if they’re dead they were human beings and not trash to be scattered or discarded," Donovan told the Cork Echo.

She said the word "America" appears on one document related to her siblings and admitted she was uncertain whether they were buried in Cork or alive in the USA.

Donovan criticized Cork City Council's decision to protect just one part of the grounds of the former mother and baby home and called for a full examination of the grounds.

"This is the uncertainty that relatives like me have to live with, and without a full investigation into Bessborough, and a full examination of the grounds, family members like me will never know the truth," she told the Cork Echo.

A total of 963 children died at the Bessborough mother and baby home between 1922 and 1998, according to a report by the Mother and Baby Homes Commission of Investigation.

However, burial records are only available for 64 of the children who died there, meaning that 859 children are unaccounted for.

Cork City Council has designated one section of the grounds as a landscape preservation zone, protecting it from future development.

The section was identified as a "children's burial ground" on an Ordnance Survey map dating back to 1950 and is part of an area that was refused development for an apartment development.

However, Donovan is calling for the entire site to be protected until it has been properly investigated.

"We want the same as what they want in Tuam. We want a full investigation of the Bessborough grounds, we want the babies found, we want a full DNA analysis of their remains, and we want them to be given a proper burial," Donovan said.