The Black Rock, an Irish Famine Monument which sits between lanes of heavy traffic, is to finally be given a memorial park after years of campaigning by the Montreal Irish community. 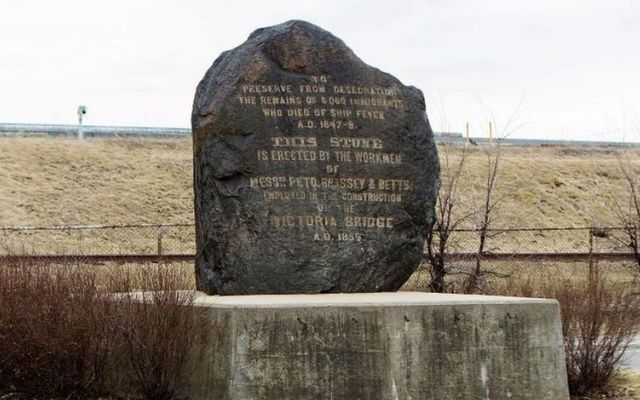 An Irish Famine Monument in Montreal, Canada which sits between four lanes of heavy traffic, is finally expected to be given a memorial park.

The Black Rock, a stone monument in Point-Saint-Charles commemorating the Irish immigrants who died on their way to Canada, is to receive a memorial site after years of campaigning.

The local political party, Projet Montreal, is pledging to create a new memorial site which will include spending $15 million to move the street which currently runs around the site, an idea the city’s Irish community has long fought for.

Beneath the Black Rock lay the remains of some 6,000 Irish immigrants who contracted typhus aboard ships as they fled the Great Irish Famine to Montreal in 1847.

The stone monument currently sits on a median, in between four lanes of heavy traffic which runs over the cemetery. The only safe way for pedestrians to view the rock is from across the street and the Irish community has long argued that this is not a respectful commemorative site.

“Unless Bridge St. is moved, the memorial would be meaningless,” he added. “How can you have a memorial that surrounds a cemetery with 6,000 bodies buried and have a street running over it?”

"What was really important to the community is that we didn't move the Black Rock itself," said Sauve

But for Fergus Keyes, board member for the Montreal Irish Monument Park Foundation, an official announcement from the city is a major step forward in what has been a very long process.

Fergus Boyle commented that the park would also be a way to share the story of 1847 when residents came together to care for the sick immigrants during the typhus epidemic.

“I think it’s a story that demonstrates some of the values of Montreal — that solidarity, generosity, welcoming of new arrival, the immigrants to Montreal. It’s a beautiful story to tell. It’s an important story,” added Sauvé.

Work on the project would begin in 2025 and is expected to last two years.