Montreal Irish fight for Famine memorial for 6,000 who died in fever sheds

Plans to create a memorial park commemorating the Irish famine immigrants who died from typhus during the 'Summer of Sorrow' appear to be in trouble. 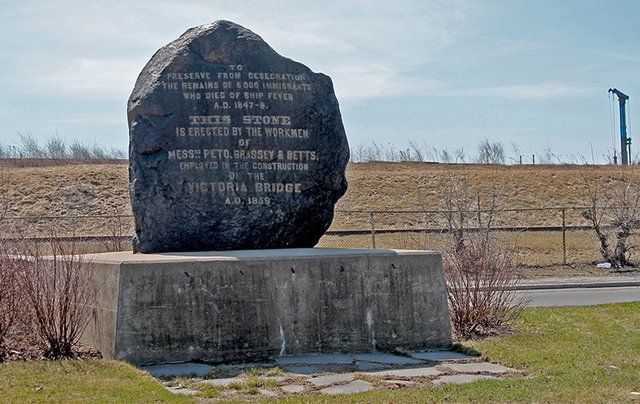 The Black Rock monument in Montreal, dedicated to the thousands of Irish famine immigrants who died of typhus in 1847. File photo

Plans to create an Irish famine memorial park in Montreal appear to be in jeopardy.

For the past five years, the local Irish community has been working to create a proper site to commemorate the nearly 6,000 people who died of typhus on Montreal’s waterfront after fleeing the Great Famine of 1847.

“Montreal was in a sense the epicenter of the 1847 famine migration,” says Montreal-born, Dublin-based historian Jason King, the academic coordinator for the Irish Heritage Trust, which operates the Irish National Famine Museum.

“It was the largest city in British North America. It was the only major city to have famine refugees in massive numbers come into the city itself.”

The only monument to mark the site in Pointe-St-Charles where so many people perished is a rough boulder in the median between traffic lanes on Bridge St near the Victoria Bridge.

Workers who were building the Victoria Bridge, which was completed in 1859, inscribed the rock after discovering a mass grave.

"This Stone is erected by the Workmen of Messrs. Peto, Brassey and Betts Employed in the Construction of the Victoria Bridge A.D. 1859.”

Black Rock is North America’s oldest famine monument, but it has no appropriate place of remembrance – just this dangerous spot in the middle of busy commuter traffic.

“You do feel a real sense of connectedness when you come to the actual place,” says King.

“Usually, when I come I’m by myself. There’s really nobody here. There’s passing traffic, but that kind of becomes white noise after a minute or two. The rock and the strange, empty parking lot. It’s a very moving site, a very strange site,” he says.

Irish community members have called to move the Black Rock to the future park on the east side of Bridge St, at rue des Irlandais, an industrial area now occupied by a parking lot and cement site.

Earlier this year, organizers of the Montreal Irish Monument Park Foundation felt betrayed when they learned the land designated for the park had been sold to Hydro-Québec, which plans to build an electrical substation to supply the future Réseau électrique métropolitain (REM) train.

Mayor Denis Coderre, who had initially pledged support for the park, has insisted the substation must go ahead but has promised to find a compromise, the Montreal Gazette reports.

The city has also been tight-lipped on its plans for the site, which was the former working-class neighborhood of Goose Village which was demolished in 1964. The area, which lies between Bridge St., the Bonaventure Expressway and Mill St., is reportedly being eyed for a baseball stadium.

“The Goose Village sector is targeted in the Stratégie Centre-Ville (a downtown development plan) which will be unveiled in the near future.”

According to Sylvain Gaudet, a researcher with the Société d’histoire de Pointe-Saint-Charles, the typhus victims were initially housed in sheds near the Peel Basin; later, sheds were built for them on the Goose Village site.

Gaudet says that archaeological research is needed to determine what traces remain of the thousands buried at the two sites.

Says King: “You can’t imagine this happening anywhere else, that you’d have a mass grave in complete abandonment.”

Archaeologist Anne-Marie Balac, who worked for Quebec’s Ministry of Culture for 27 years and is now a consultant, told the Montreal Gazette that “it’s unthinkable” to allow any project to be built without a thorough investigation of what lies under the ground.

“We know it has a very high archaeological potential because it’s a cemetery,” she said.

She said that several bodies have been unearthed during roadwork and building over the years, leaving no doubt that the site is a former cemetery.

“It’s urgent to act before going too far.”

Irish influx and suffering during the Great Hunger

On March 8, 1847, the Montreal Witness newspaper reported on the expected influx of immigrants from famine-stricken Ireland.

“We learn from British papers and private letters published in those of the United States, that the preparations for emigration from Britain, and especially from Ireland, are unprecedentedly great.”

Fearing a deluge of Irish immigrants, the United States tightened regulation for passenger ships, which pushed up the travel costs.

This meant, the Witness predicted, that the poorest would be forced to travel via Quebec City and Montreal.

Soon “our shores are likely to be thronged with emigrants, chiefly of a class who will have little or nothing left when they arrive,” the newspaper warned, while urging that “no time ought to be lost” in making preparations.

However, nothing could have prepared the city for what they experienced when sick and starving Irish began stepping off steamboats from Quebec City.

“Good God! What a spectacle. Hundreds of people, most of them lying naked on planks haphazardly, men, women and children, sick, moribund and cadavers; all of this confusion hit the eyes at once,” the Annals of the Sisters of Charity (Grey Nuns) reported on June 7.

These overcrowded “coffin ships” were the perfect breeding ground for typhus, spread by body lice infected with the Rickettsia prowazekii bacterium.

“Hundreds of poor people, men, women, and children of all ages, from the drivelling idiot of ninety to the babe just born, huddled together without light, without air, wallowing in filth, and breathing a fetid atmosphere…” wrote Irish landowner and social reformer Stephen de Vere describing a crossing to Quebec in 1847.

Writing to the chief immigration agent in Quebec City, Grosse-Île’s medical superintendent, Dr. George Douglas observed: “I never saw people so indifferent to life – they would continue in the same berth with a dead person until the seamen or captain dragged out the corpse with boat hooks.”

The sick were initially housed in existing sheds on the south bank of the Peel Basin of the Lachine Canal, but as the epidemic spread, authorities built new sheds on the shores of the St Lawrence River, approximately where the Black Rock stands today.

Those who died were buried next to the sheds in long trenches. The coffins were piled three deep.

“The sheds were more or less here, on the waterfront,” King says.

Nuns, priests, Protestant clergy and others, paying no heed to their own safety, cared for the sick newcomers. The Mohawks of Kahnawake brought food for the strangers.

“For all of the deaths, all of the anxiety and the fear, it’s in many ways a positive story. It’s a story of self-sacrifice, a story of people rising to the occasion,” King adds.

“These are much, much bigger challenges than we can possibly imagine. When there were real risks, we accepted them all, with a generosity of spirit I think we rarely see today anywhere.”

Hundreds of Irish orphans were adopted by Quebec families and their descendants are among the 40 percent of Quebecers who claim some Irish ancestry, the Montreal Gazette reports.

He says the city’s response to the famine migrants of 1847 sends a powerful message today.

“In a nutshell, it’s a story of integration.”