Brothers Paddy, Willie, and Johnny Hennessy have been laid to rest after an alleged murder-suicide tragedy in Mitchelstown, Co Cork on February 25. 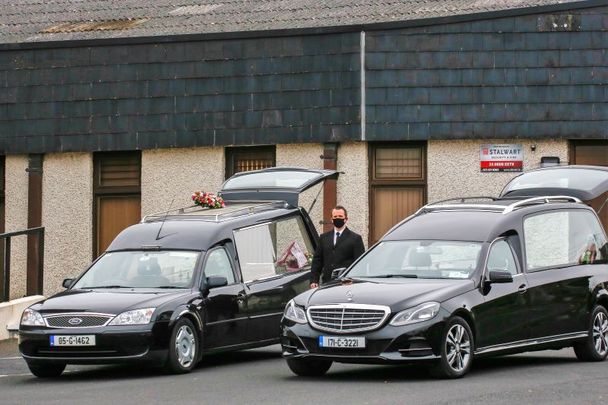 March 4, 2021: Hearses parked outside the funerals of Willie and Patrick Hennessy in Mitchelstown, Cork. RollingNews.ie

Brothers Willie, Paddy, and Johnny Hennessy have been laid to rest after last week’s alleged murder-suicide in Mitchelstown, Co Cork.

Johnny Hennessy, 59, allegedly killed his brothers Willie, 66, and Paddy, 60, before taking his own life in the nearby River Funshion on February 25.

According to The Irish Independent, a joint funeral service was offered for Willie and Paddy today, March 4, before the brothers were laid to rest in the same plot.

A funeral service for Johnny was held on March 3, and he was laid to rest in a plot with his previously deceased brother Jer.

The funeral services were not publicly announced ahead of time, and only a limited amount of mourners were able to attend due to current health restrictions.

Breda O'Sullivan, sister to the deceased Hennessy brothers, was in attendance at both funerals.

On March 2, ahead of the funerals, The Irish Times reported that one source said: “It is just baffling. Family and friends don’t know what triggered it and we can’t come up with any issue bubbling in the background.

"There are a load of rumours and a lot of speculation but there’s nothing definite emerging to say this was what triggered it all."

On February 26, Gardai said in a statement: "Shortly before midnight, Thursday 25 February 2021, Gardai in Mitchelstown were alerted to an incident at a farmhouse and lands at Curragorm, Mitchelstown.

"A male in his 60s was discovered deceased in the farmyard.

"Following a further search, the body of a second male in his 60s was also discovered in a shed on the farmyard. Both males are related.

"Gardaí commenced a search for a 3rd male, also related, believed to be driving a Red Toyota Corolla Carvan, 03 WW 1556. This car was subsequently found by Gardaí parked at an unconnected farmhouse at Killacluig, Mitchelstown. This car has been removed from the scene for a technical examination.

"An Garda Síochána have discovered the body of male in a river in a remote location nearby. Investigations are ongoing at this time to recover and identify this body.

"A number of scenes have now been preserved for technical examination by the Garda Technical Bureau today."

Post-mortem examinations have been carried out on the three brothers out at Cork University Hospital, but the findings have been kept private for operational reasons.

Gardai continue to appeal to the public for any information relating to the tragedy.