While the PSNI say they are examining the video of the song mocking Michaela McAreavey's murder, two men have issued a "sincerest and deepest apology" for their involvement. 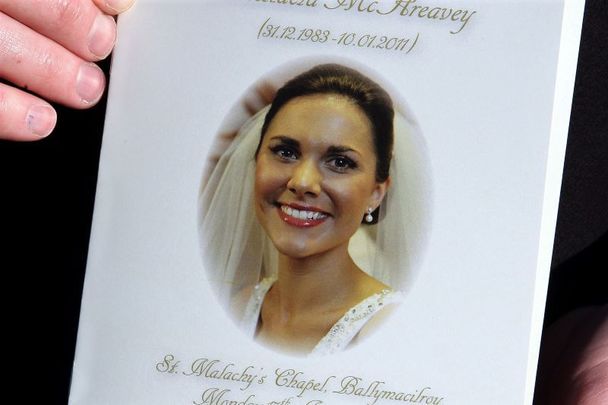 The order of service for Michaela McAreavey's funeral mass at St Malachy's church outside Ballygawley, Co Tyrone on January 17, 2011. RollingNews.ie

Video of people singing an “abhorrent” song about the murder of Co Tyrone woman Michaela McAreavey has not only been met with widespread condemnation, but it has also spurred police attention and the job termination of at least one person in the video.

The Police Service of Northern Ireland (PSNI) confirmed on Friday that they would be examining the content of the video “to determine if any offences may have been committed.”

A spokesperson for The Grand Orange Lodge of Ireland also said on Friday that the group "condemns the content without reservation" and that an inquiry has been instigated.

"If any of those involved are found to be members of the Institution, they will face disciplinary proceedings," the spokesperson said.

Grand Orange Lodge of Ireland response to a video circulating on social media relating to the murder of Michaela McAreavey.https://t.co/djxxhKP17K

The Facebook live video, understood to be filmed at an Orange hall in Co Down, had been on Facebook for several days before it began to spread widely on social media on Thursday, June 2.

Originally posted by Andrew McDade, the video was still available on Facebook as of Thursday night, but McDade's entire profile appears to have been deleted as of Friday night.

Still, the shocking video has been saved and shared on other platforms:

On Friday, McDade and another man, John Bell, apologized in a statement via JWB Consultancy: "It is a matter of deep shame and regret that we became involved in the Facebook live publication of a video which included the singing of an offensive, vile and wholly abhorrent chant about the deceased Michaela McAreavey.

"This Facebook live video was not streamed with the intent of broadcasting any offensive chants whatsoever, rather it was generally broadcasting from the room. However, whether broadcast or not, the relevant chants should never have been sung either in public or private.

"We offer our sincerest and deepest apology to the Harte and McAreavey families, and indeed to wider society for our actions which whilst fuelled by alcohol, can neither be mitigated or excused in any shape or form. Our apology is unequivocal, and our acceptance of wrongdoing is absolute.

"This incident is not reflective of who we are as people, nor more importantly of our respective families and friends. Several family members and friends have been subjected to online threats and abuse in recent hours due to our unacceptable actions. This is unfair and unwarranted; it is us and us alone who are responsible for our actions.

"In addition, this behaviour is unreflective of the values of the Loyal Orders and the wider unionist and loyalist community.

"Whilst it is scant consolation for the hurt our actions will have caused, we will write a formal letter of apology to the Harte and McAreavey families and make a confidential donation to a charity of their choice.

"Whilst brought upon ourselves, this incident has had a significant impact upon us and we ask for privacy at this time. We will making no further comment."

Statement issued on behalf of Mr John Bell & Mr Andrew McDade who wish to express their sincere apology for their involvement in the broadcast/singing of a vile and abhorrent chant relating to the deceased Michaela McAreavey pic.twitter.com/IRqmy99TxD

Despite the apology, Linfield Football Club in Belfast separately announced on Friday it had contacted one of the men in the video, reported to be Bell, to inform him that “his voluntary association with the club has been terminated with immediate effect.”

Elsewhere, Norman Emerson Group, based in Co Armagh, said it is aware of the video allegedly made by one of its employees and that it was launching an internal investigation.

“We will not tolerate or condone sectarianism, bigotry, or intimidation in any form from anyone employed by us,” the group said.

We have been made aware of highly offensive social media content allegedly made by one of our employees, and now comment as follows –

As a family and as a business, we endeavour to ensure an ethos of respect, inclusivity and consideration in everything we do. pic.twitter.com/eoUIgqItPc

In January 2011, 27-year-old Michaela (née Harte) McAreavey was murdered in her hotel room in Mauritius where she was on her honeymoon with her new husband John McAreavey. Two hotel workers accused of her murder were tried and declared not guilty and acquitted in July 2012.

While representatives across the political divide have condemned the video, John McAreavey, Michaela's widower, said on Friday: "Hate can hurt, but never win."

Michaela was a vessel of love, courage and dignity.