“Within those documents, we have a plethora of information that was received. It was amazing how good the Intelligence was back in 1921.” 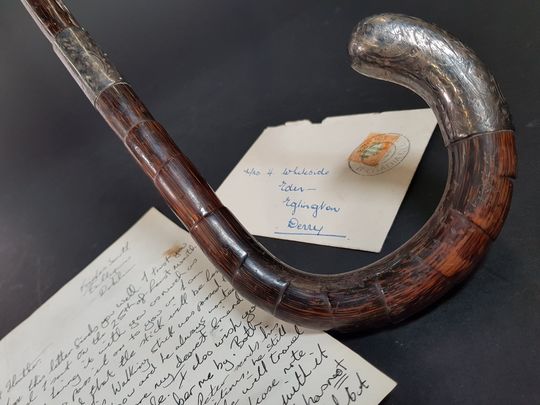 Artifacts of Irish history, from War of Independence and The Troubles, as well as those from the Nazis and World War II to go up for auction, available online.

A walking stick owned by Michael Collins is expected to be sold for €12,000 when it goes for auction next week.

Also on sale at the auction in East Belfast will be police files tracking Collins’ activities during Ireland’s War of Independence a century ago.

Unusually, items linked to republicans and loyalists in the recent Troubles spell of 30 years in Northern Ireland will also be auctioned.

They include a series of artworks painted by loyalist Michael Stone, the Ulster Defence Association (UDA) man convicted of three murders at an IRA funeral in Belfast in 1988.

The Press Association reports the sale at Bloomfield Auctions will also include a miniature hurling stick signed by republican prisoners, including former IRA leader Joe Cahill, and a H-block Maze Prison gate complete with keys and hinges. Also for sale is a service medal from the 1916 Easter Rising in Dublin,

The auction also includes two pieces from dining sets, a porcelain cream jug and a spoon, that were used by high-ranking Nazis Heinrich Himmler and Joseph Goebbels on their personal train carriages during World War II.

Bloomfield managing director Karl Bennett said the sale on Tuesday and Wednesday of next week is expected to draw particular interest to the Collins pieces.

The Intelligence reports on Collins are contained in a dossier of Royal Irish Constabulary documents that cover the period 1920 to 1922.

Bennett said, “Within those documents, we have a plethora of information that was received. It was amazing how good the Intelligence was back in 1921.”

He added, “We have it mentioned within the documents that if Michel Collins was seen in an area to please arrest this man, as well as a host of other information. It’s a really important piece of history.”

Bennett said the Collins walking stick has a silver collar and tip and is accompanied by a letter of provenance.

Information is available on www.bloomfieldauctions.co.uk.