Not that Michael Collins, but this was an extraordinary feat. 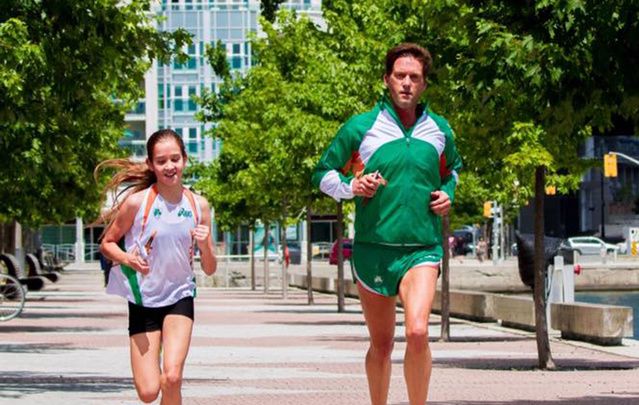 Michael Collins reaches Toronto with his daughter falling in step beside him for the last leg of an epic 549-mile journey. Ireland Park Toronto / Facebook

In memory of the thousands of immigrant Irish who lost their lives in Canada during 1847, the most harrowing year of the Great Hunger, Irish author Michael Collins has run almost 600 miles from Quebec to Toronto on the Irish Diaspora Run.

Setting off from the Grosse Île quarantine station in Quebec on June 10 the 52-year old Collins ran more than a marathon a day, rain or shine, to complete the 548.29 mile journey to Toronto's Ireland Park in just 31 days.

Author of ten books and former captain of the Irish team at the 100km World Championships, Collins crossed over the finish line on July 11 accompanied by his daughter. It was the perfect ending to a journey that, in truth, began last October when Collins took his daughter to Quebec to learn French.

Irish Diaspora Run 2016 — Day 31 (video) Reaching Ireland Park Famine Memorial (Toronto, ON) 1.00 mi TOTAL: 548.29 mi (66:38:00) 10 Jul 2016 Many thanks to all who have accompanied me on this journey! I was joined on foot by my daughter, Tess, as I reached Ireland Park Famine Memorial. The Ireland Park Famine Memorial was dedicated by Irish president Mary McAleese in June 2007. "Ireland Park is the principal memorial to the Irish Famine experience in Toronto. It is a bridge from the past to the future. It is a bridge that will link two nations and two cities. It is the story of a destitute people overcoming unimaginable hardship and suffering. It speaks to the kindness and generosity of Canadians—traits which are as consistent now as in 1847." — Ireland Park Foundation Toronto's Ireland Park Foundation's mission is to support the Irish presence in Canada and the relationship with Ireland, including Ireland Park Foundation's integral involvement in the construction of a commemorative park in honour of Dr. George Robert Grasett and others who gave their lives helping Irish Famine migrants in 1847 (http://irelandparkfoundation.com/famine-memorial/ireland-park-tomorrow). Limerick, Ireland native Michael Collins seeks to highlight the historical circumstances that forced the Irish emigrants of 1847 to board the infamous coffin ships to Canada, whilst also paying tribute to those Canadians who cared for the typhus-stricken Irish, and connecting those who are a part of a greater Irish Emigrant History or who simply take interest in Irish History and Culture. Read more about the ~550 mile Irish Diaspora Run 2016 honoring the events of 1847: www.diasporarun.org 󾀼 PLEASE SHARE THIS POST AND LIKE THIS PAGE 󾀼

“My daughter's home schooled so I said, ‘Let's just learn French.’ We were up there [in Quebec] going around to different museums and I bumped into a couple of people who said, ‘You know there's 800 orphans that were sent out [to various locations in Canada] after 1847?’ said Collins.

“Over the course of October, I spent time at the library, spent time in Irish heritage organizations and then realized that there was a specific story to tell that began in May 1847 with the opening of the St. Lawrence [river] and ended in October.

“As a novelist, it seemed to be a story that encapsulated everything that went wrong during the Famine, from the laws enacted in the British parliament, the passage across to Canada and then the route down to Toronto. It all seemed to be one contained story and as a novelist you look for that.”

At the height of the Great Hunger, the British Parliament cut off famine aid and enacted the Famine Poor Laws, which transferred responsibility for the welfare of their tenants to the absentee landlords. With immigration laws in the US beginning to tighten due to the mass influx of sick passengers from Ireland, among other aspects, the landlords began to 'encourage' their tenants to look to Canada as another destination for those fleeing hunger.

Connecting with this terrible history, and the bravery and kindness of the Canadian people who risked their own lives to tend to the sick and dying, Collins felt eager to explore this connection on a personal level and an idea began to form of completing an Irish diaspora run across the country.

Collins was no stranger to extreme ultra-distance running. He had previously competed in The Everest Marathon, The North Pole Marathon, The Antarctic Marathon and The Sahara Marathon among others. The route he planned required at least a marathon a day, with more ground covered on days when the weather was on Collins’ side.

Contacting various Irish organizations along the route, the run began to grow and, with the support of The Irish Times and many historians and groups along the way, Collins looked to to raise awareness and funds for those heritage groups on the Canadian east coast fighting to establish and maintain their own Famine memorials in their towns and cities.

Despite the 6,000 famine immigrants buried in the city in 1847, Montreal, in particular, is in the midst of a long battle to establish an official memorial park.

IrishCentral spoke to Collins during the first week of the month-long journey as he stopped in the small town of Nicolet, Quebec. Collins voiced his frustration that such a monumental year in Canada’s history was being largely forgotten about. In particular, he mentioned the difficulty The Memorial Park Foundation in Montreal was having in properly commemorating city's Famine immigrants and the Grey Nuns who died serving the poor Irish who had arrived in their city.

“It’s hard to believe that Montreal is just begging to get a park for the commemoration of 6,000 people, that the stone [Black Stone memorial] is always under threat of being moved and that there will be no plan in place to just commemorate it,” he said.

“Maybe that's another motivation for running because it drives me nuts that, I'm doing this for myself, but there's just little interest generally. It's so hard to reach people and even if you do there's probably the faded tense of ‘It's so long ago, why are you living in the past? You're part of the Irish diaspora, get over it. People are trying to live in Ireland through the housing crash, leave it alone.’

“That's the frustration and why I do it. If nothing comes of it, at least I tried ... First and foremost, I just want to do the journey for those people.”

And for the first part of his journey, at least, Limerick-born Collins was greatly aided in imagining the journey the Famine immigrants took as he took in the Quebec landscape, which he compares to the west coast of Ireland with its churches and religious statues.

“I've been running beside the water,” he told us from Nicolet, “and because there's so many statues, it's so reminiscent of the west of Ireland, with crosses built into the side of the road. Over the years going back home, seeing these encrusted faces and they're all worn away because of the sea but Mary looking up at Jesus on the cross.

“Ireland's changed our sense of being Catholic,” Collins continued, “and what it meant to my parents and grandparents has changed but in this particular part of the run ... it's very reminiscent of Ireland and of an old Ireland and to be close to the fog and the rain … you might as well be going down the Shannon. On this small road there's churches everywhere, there's religious icons everywhere, so that just gives you a sense of these people coming in starving, frozen as they come down here, those churches were around in the 1840s.”

Collins mentally broke up his run into five mile segments, which helped him avoid dwelling on the great distance ahead of him. Thanks his experience as a long-distance runner, Collins completed each day’s run at a good marathon standard, clocking in just 66 hours, 38 minutes to complete some 548 miles.

Although he found it tough spark some interest in his campaign, Collins believes there are still many Canadian Irish, even those in Quebec who speak only French, who know of their Irish heritage and are proud of it.

“I think during The Gathering … they brought a man over but he had no English but he was a direct descendent of 1847,” Collins said, “and he knew it, too.

“He was just a farmer, he might as well have been out in Galway and the brought him over for The Gathering. It just showed how much they were subsumed into Canadian/French-Canadian life, but he knew he was Irish and he took much pride in the fact that his relatives had survived and that he was adopted in the new homeland.”

You can find out more about the Irish Diaspora Run and the efforts to raise funds for Irish Famine memorials in Canada here.

Irish Diaspora Run 2016 — Day 15 (video) Morrisburg, ON to Block Island/Brockville, ON Thanks to Tony and Eithne Dunbar and Gerry McDougall of the Brockville Road Runners for joining me along the Waterfront. And thanks to Nattanya Hewitt and Members and Friends of the Brockville Irish Cultural Society for their Welcome and Support! Read more about the 600-mile Irish Diaspora Run 2016 and SIGN UP as a sponsor to JOIN THE JOURNEY: www.diasporarun.org 󾀼 PLEASE SHARE THIS POST AND LIKE THIS PAGE 󾀼