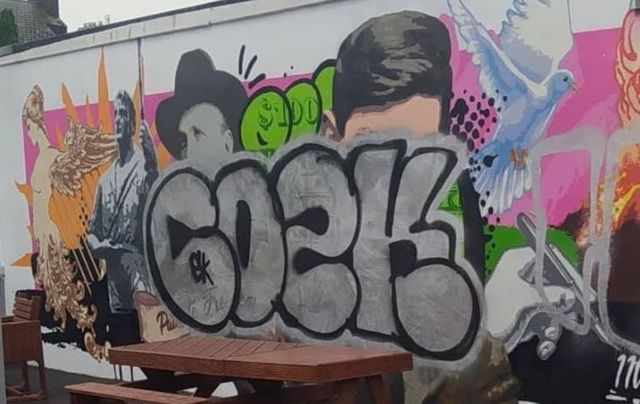 A man alleged to have caused damage to a Michael Collins mural in West Cork has been refused bail after a court heard his behavior may be “spiraling out of control”.

Locals in Clonakilty, Co Cork discovered earlier this week that a much-loved mural of the Irish revolutionary Michael Collins had been graffitied.

The face of Collins had been spray-painted over with the tag 'CO2K' just days before the launch of the new West Cork Michael Collins Trail.

In a statement to Cork Beo, Gardaí said they had "arrested a man in his 20s following a number of incidents of criminal damage in Clonakilty between 10th and 13th September 2021."

The mural was painted earlier this summer, funded by Cork County Council and completed by artists ADW and Darren Warren from Waterford Walls Project, an international street art festival based in Ireland.

Ah Jesus no! Why would anyone do that?! I really feel for the artists and community who have put so much work into this area. We will get it back to how it was!!!

The Irish Examiner reports that the suspect appeared in custody before Skibbereen District Court on 11 criminal damage charges.

Det. Garda Anthony Lyons objected for him to be released on bail on the basis of the strength of the evidence, the seriousness of the offenses, and the fact that the alleged offenses were committed while the suspect was on bail in relation to other alleged offenses.

While Det. Garda Lyons said Gardaí had first responded to an eyewitness report of the mural being defaced with the tag CO2K. He said that when the accused was arrested spray paint caps were found on his person and his runners had spray paint on them.

He described a “vast amount” of criminal damage around Clonakilty that is under investigation, as well as a number of witness statements and harvested CCTV.

Det. Garda Lyons told the judge a search warrant was obtained and in the man's room a sketch pad with the CO2K tag was found, along with spray paints.

The court was told that the suspect is not taking his prescribed medication and Det. Garda Lyons said: “His behavior appears to be spiraling out of control.”

The judge remanded the man in custody to appear before Clonakilty District Court on September 21.