Mary Robinson said at COP26 that "some of the leaders who could do most are not in crisis mode" when it comes to climate change. 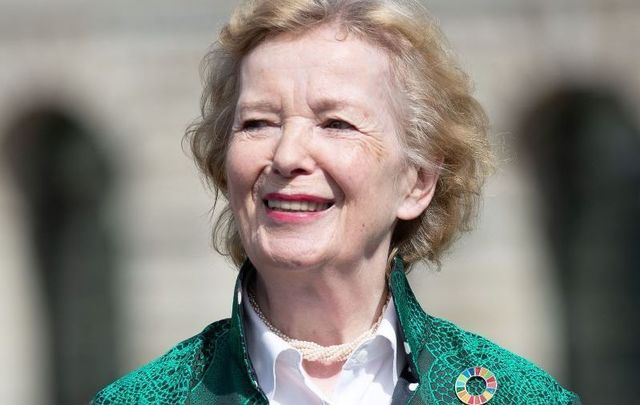 Mary Robinson, former President of Ireland, at the 2020 National Day of Commemoration Ceremony in Dublin. RollingNews.ie

Mary Robinson, the former President of Ireland and the current chair of The Elders at the UN, took aim at some nations who she feels are not yet in "crisis mode" regarding climate change on Thursday at COP26.

“I’m saying to the leaders who are here now, this is on your watch,” an emotional Robinson said while speaking with Sky News at COP26 in Glasgow, Scotland on Thursday, November 10.

“It’s so important. We are literally talking about having a safe future.

“The Elders are pressing the leaders [to] understand.

“You can’t negotiate with science. You can’t talk about a glass being half full. We have to get it [global warming] down. We have to be on track for 1.5 and it is doable.”

Robinson, who was the UN Special Envoy on Climate Change in 2014 - 2015, was responding to an update issued by the Climate Action Tracker on Tuesday that said the world is "on track for a 2.4°C temperature increase by the end of the century."

The Paris Agreement, adopted by 196 parties at COP21 in 2015, aims to limit global warming to a maximum increase of 2°C, preferably 1.5°C. One of the main goals of COP26 is to "secure global net-zero by mid-century and keep 1.5 degrees within reach."

Washington asked Robinson: “Are leaders taking it as seriously and feeling it like you are?”

Robinson said: “Leaders of the Climate Vulnerable Forum, the poorest countries, yes they are in crisis mode. But, unfortunately, I’m afraid, some of the leaders who could do most are not in crisis mode.

“I do think we should call out the countries. Yes, China, can do more and it’s a pity they haven’t been here at head of state. Russia, similarly.

“But, also, Brazil. Australia, a wealthy country, is still in fossil fuel mode, not in crisis mode.

She continued, “What Saudi Arabia have been able to do is take language out of a lot of the text.

“The reference to ACE, as it’s called, then 10-year plan for education on climate change for youths. They’ve taken out all the language of youth, human rights, gender equality.”

She continued: “How were they able to take the language out? Because not enough countries were in the room.

“It’s my experience in previous COPs, Saudi Arabia is always there when it matters and they kind of block things.”

Saudi Arabia has denied the claims.

An emotional Mary Robinson, Chair of @TheElders and former President of Ireland slams leaders for not being in crisis mode and blames Saudi Arabia for blocking @skynews #COP26 Today will be very important. pic.twitter.com/BxEcXzGptg

Robinson's emotional commentary on Thursday comes a week after Taoiseach Micheál Martin confirmed that Ireland will more than double its contribution to developing countries in the fight against climate change.