Five suspects are now facing charges after Representative Mary Gay Scanlon was carjacked at gunpoint in Philadelphia on December 22. 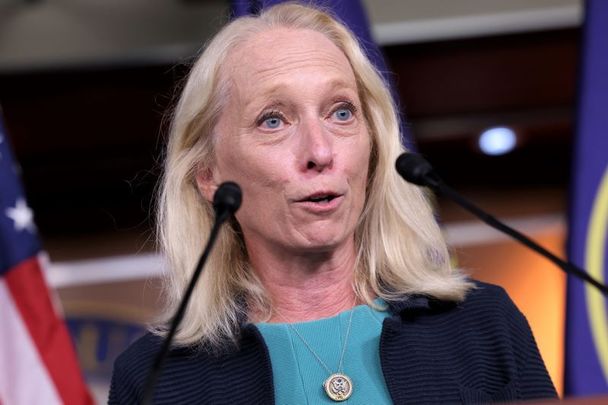 September 21, 2021: Rep. Mary Gay Scanlon (D-PA) speaks at a news conference on the Protecting Our Democracy Act, at the U.S. Capitol in Washington, DC. Getty Images

Congresswoman Mary Gay Scanlon, a member of the Friends of Ireland Caucus in US Congress, is unharmed after she was carjacked at gunpoint in Philadelphia yesterday, December 22.

Congresswoman Scanlon was carjacked at gunpoint in FDR Park in Philadelphia following a meeting at the location, her office said in a statement on Wednesday evening.

“The Congresswoman was physically unharmed," her office said. "She thanks the Philadelphia Police Department for their swift response, and appreciates the efforts of both the Sergeant at Arms in DC and her local police department for coordinating with Philly PD to ensure her continued safety.”

Statement from the Office of Congresswoman Mary Gay Scanlon on today's incident: pic.twitter.com/fomScnWUXo

At about 11 pm local time on Wednesday, Delaware State Police confirmed that five suspects were taken into custody after they were located inside of the vehicle, a 2017 Acura MDX, that was stolen from Congresswoman Scanlon.

The car was located in Newark, Delaware at about 9 pm on Wednesday night.

The suspects were transported back to Delaware State Police Troop 2 for processing.

In a statement on Thursday, the Delaware State Police said that five individuals, all from Wilmington, Delaware, were arrested for receiving stolen property and related charges after they were located in Pennsylvania Congresswoman Mary Gay Scanlon’s stolen vehicle Wednesday night.

"During that time, five suspects were observed entering Congresswoman Scanlon’s stolen vehicle. As Law Enforcement attempted to contact the occupants, they all attempted to flee but were ultimately apprehended.

All five suspects were transported to Troop 2 where they were each charged with the following crimes:

The State Police said: "The 15-year-old juvenile male was arraigned in the Justice of the Peace Court #11 and committed to the New Castle County Detention Center on a $3,500 secured bond.

"The investigation determined Josiah Brown was involved in the armed carjacking in Philadelphia. He was turned over to the custody of the Federal Bureau of Investigation for formal charging.

"The stolen vehicle was towed to Delaware State Police Troop 2 and will be recovered by the Philadelphia Police Department."

Scanlon, who is in her second term, represents Pennsylvania’s 5th Congressional District, an area which she says has "significant ties to Ireland." Earlier this year, she helped facilitate a new direct shipping route between Port Chester in Pennsylvania and Cork in Ireland:

I am proud to celebrate the new shipping route between Port of Chester and Cork, Ireland which will expand our region’s leadership as an entryway to America while bringing jobs and economic development to our district! pic.twitter.com/xWFHz3RNbA

As a member of the Friends of Ireland Caucus in US Congress, Scanlon, has been vocal about protecting the Good Friday Agreement, of which the US is a guarantor:

Today is the anniversary of the Good Friday Agreement—a guiding light that promised stability and prosperity for the island of Ireland. Twenty-three years after its signing, we cannot go backward. We must remain committed to supporting this hard-won peace. https://t.co/7eQSHjBld4