He left the priesthood for love, now he's back after wife died 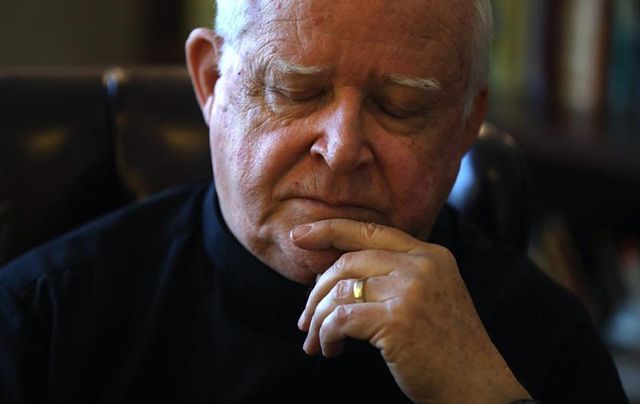 An Irish American who left the priesthood in 1978 to marry has now returned to the altar following the death of his wife two years ago.

The son of Irish immigrants, Father Frank Daly, now 74 and a grandfather of five, still wears his gold wedding band on his left hand when he says Mass at the Gate of Heaven Church in South Boston.

"When I first came here, I met a lady and she said, ‘Oh, Father, welcome to South Boston,’" he told the Boston Globe. "Then she stopped and said, ‘We don’t like long homilies.’ And I said, ‘Well, about three months ago, I was sitting where you are. And I don’t like them either.’"

Frank Daly’s story is one of a remarkable journey.

Mary Gautier, senior research associate at the Center for Applied Research in the Apostolate at Georgetown University, said that while it is not uncommon for widowers to enter the priesthood, Daly’s return to the vocation after giving up his collar to wed is rather unusual.

"This is the first one that I’ve heard of," she said.

Frank and Janice Daly in 1984, six years after their marriage.

Daly, the second of four children born to immigrants from Skibbereen in County Cork, had his first priestly gift conferred upon him in 1967 at St. Peter’s Basilica in Rome, where he had studied at the North American College. Following his ordination, he found his way to St. Mary’s in Dedham, MA at the age of 25.

It was in Dedham that he first met the Goulds, a parish family who had an attractive daughter named Janice, with whom he shared many common interests. She had, in fact, once been a nun, a member of the Sisters of St Joseph. Later, while serving in Sudbury, Frank began hearing a different calling. He and Janice began exchanging phone calls, having dinner, and spending time together on Frank’s day off.

Of course, his being a priest made things complicated.

"Initially, if you find someone like that attractive, you recognize that that’s something that you’ve kind of sworn off," he said. "You try to integrate it into your spirituality – that it’s not something that you really should pursue."

He traveled to California for further studies in theology and also for the time and space to sort out his feelings on the developing relationship.

"I thought it would give me a breather to work this whole process through in my head," he said.

While away, he wrote to Janice often. It was clear, the two had fallen in love.

In early 1978, Frank and Janice were married in a civil ceremony. Frank had asked permission to leave the priesthood before the marriage but was refused. He asked again afterward and was granted approval, and in 1981, was married in the Catholic Church.

Daly found work in the Massachusetts secretary of state’s office, where he served for a time as director of public records. The Boston Globe reports he worked as a special assistant to US Senator Paul Tsongas and later led the business ethics program for the defense contracting giant Northrop Grumman.

He and Janice, a middle school math teacher, had two children. The family went to church every Sunday.

Their son, Chris Daly, now an Army pediatrician in Texas, remembers his father as one who would bring him to hockey games, who expected much but was also a gentle moralist. Chris recalled how one day he smashed a window in the rear of their home with an errant fly ball. He dreaded his father’s return home, but his father took it in stride.

"He said, ‘Well, every American kid breaks a window with a baseball once,’" Chris said. "It took me off guard. I think I had to do extra chores."

In 2003 Janice suffered a stroke in the middle of Mass at the parish church. She was a teacher in the parish school. She suffered left-sided paralysis, but cognitively she was the same person. Frank became her caretaker and they would go on daily outings.

"She was very resilient and came back from the brink of death a number of times," Father Daly said.

They were together constantly for 12 years until her death two years ago.

After her passing, Daly sought out a spiritual director and tried to make sense of his life. He thought again about the priesthood, but he didn’t want to diminish his married years.

"I had all sorts of things I had to work through," he said.

Eventually, he found himself in conversation with officials of the Boston archdiocese.

Daly spent a year at Pope St. John XXIII National Seminary in Weston. On his birthday, the day before Thanksgiving last year, he received a phone call. It was the archbishop of Boston.

"Frank, I’ve called to wish you a happy birthday," Cardinal Sean O’Malley said to him. "I have a present for you from Rome."

That following Monday, Daly arrived at the rectory at the Cathedral of the Holy Cross in the South End, where he was vested in an alb and, after the gospel, Cardinal O’Malley administered the oath of fidelity.

He then, once again as the Rev. Francis J. Daly, said Mass with the cardinal.

Recently, Father Daly was named pastor of Our Lady of Sorrows Church in Sharon. He will start there on June 1.

This month, his children were with him when he celebrated Mass at Holy Family Church in Duxbury, marking the second anniversary of his wife’s death.

Daly's daughter, Meghan Daly Murphy of Mansfield said: "I remember thinking that I would love to see him as a priest again. He’s just a special man. He has a gift."