As “Rest In Power: The Trayvon Martin Story” starts off on Paramount, we look back on how Mark O’Mara referred to his Irish roots when summing up for the jury in the George Zimmerman case. 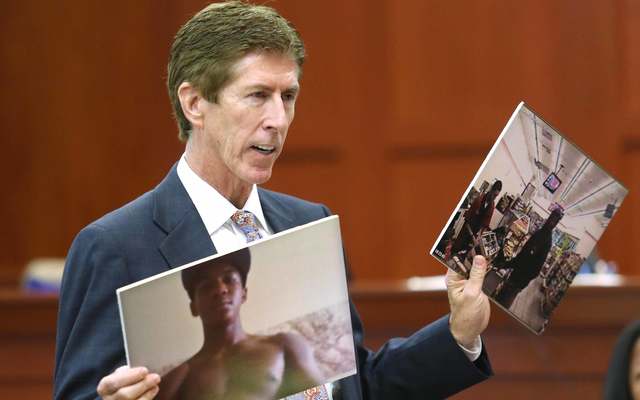 In his defense of George Zimmerman for the killing of teenager Trayvon Martin, attorney Mark O’Mara referred to his Irish roots in Nenagh, Co. Tipperary, and a case where an innocent man may have been sentenced to hang.

New Paramount show “Rest In Power: The Trayvon Martin Story” started off on Monday, July 30, stirring strong reactions on social media among those that watched it. It once again brought to light the Irish connections to the trial of George Zimmerman and his acquittal in the death of Florida teen Trayvon Martin.

The six-part docu-series, produced by Martin’s parents Tracy Martin and Sabrina Fulton and rapper Jay-Z (who uses his original name Shawn Carter for projects outside of music), the show explores the tragic story of the unarmed 17-year-old Martin who was killed on Feb. 26, 2012, during an incident with neighborhood watch volunteer George Zimmerman in Sanford, outside Orlando.

His death and the acquittal of Zimmerman in a 2013 trial was among the many incidents that cemented the Black Lives Matter movement, after clearing the man in his 30s of the second-degree murder of the Florida teenager under Florida’s “stand your ground” self-defense law.

Zimmerman’s lawyers, including Irish American attorney Mark O’Mara, had claimed that he shot Martin in self-defense and O’Mara will be shown throughout the series in archival footage of the trial.

In fact, when Bronx-native O’Mara was summing up the case for the jury, he recalled his Irish roots and dug up the story of a case in Nenagh, Co Tipperary, stating that the incident where an innocent man may have been sentenced to hang was very much on his mind during the George Zimmerman trial.

Firstly O’Mara quotes John Adams as he discussed the American justice system stating: “It is more important that innocence be protected than it is that guilt be punished, for guilt and crimes are so frequent in this world that they cannot all be punished.

He then added that he had a quote up in his office “that talks about that in a different way from the 1700s in Nenagh, that’s where my family came from in Ireland. I never was (living) there, I was there to visit.”

“A guy went to the gallows,” O’Mara explained of the Co Tipperary case.

"And the question was condemning someone and not being absolutely certain as to your decision and sending him to the gallows not because he was guilty but maybe because he was innocent and maybe you just didn't know.

“So, that’s why we have a system that puts so much of a burden properly on the state attorney's office that we don’t cut any corners and make any assumptions.”

You can watch his full closing argument here:

Did you watch the first part of “Rest In Power: The Trayvon Martin Story?” Let us know what you thought about it in the comments section, below.