Jay-z’s “The Story of O.J.” and Notre Dame’s “racist” leprechaun

Shouldn’t we be using the Jay-Z defense? Taking the words and imagery once used to oppress our people and turning them around. 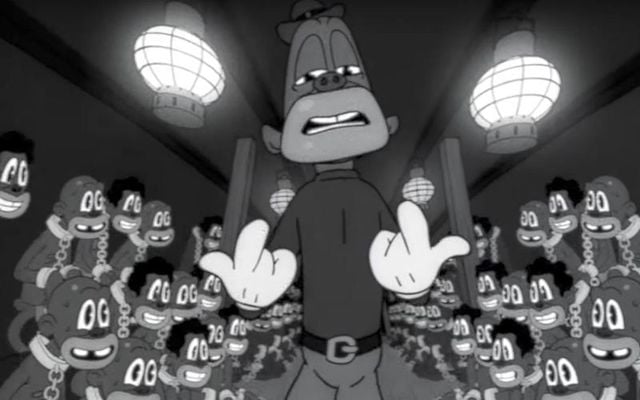 A still from Jay-z's video for "The Story of O.J.". YouTube still

Shouldn’t we be using the Jay-Z defense? Taking the words and imagery once used to oppress our people and turning them around.

More specifically, I wonder if they like the recent Jay Z tune “The Story of O.J.,” especially the animated video.

I’m gonna go out on a limb and say they wouldn’t care for it.  In fact, I wouldn’t be surprised if they viewed it as proof that America, and all of Western Civilization, are going straight down the toilet.

And yet, when the likes of Holtz and Messer rant and rave in defense of Notre Dame’s angry leprechaun logo which has become the subject of much recent controversy, they are actually using what you might call a “Jay-Z defense.”

Some background: Last week, the Cleveland Indians baseball team announced that they would finally retire their Chief Wahoo logo, a grinning, red, native American that, to many, was kind of demeaning, given the history of oppression native Americans have faced in the U.S.

This led to a broader debate about logos and ethnicity, and at that point it’s hard to ignore the Hibernian elephant in the room.

"Many Irish Americans are not offended (by the Notre Dame logo), but many are," said ESPN’s Max Kellerman. "Should that also change? The answer is unequivocally yes. Pernicious, negative stereotypes of marginalized people that offend, even some among them, should be changed. It's not that hard.”

Holtz fired back, “First of all understand how the Fighting Irish came about. It is not about Irish, it’s about a spirit, it’s about a feeling,” he told Fox Business.

“Learn and understand what it means, and you don’t have to be from Ireland to be Irish.”

I really don’t know what he’s talking about either.  But he seems to think history is important.  Okay, got it.

So, Holtz and Messer seem to agree that the angry leprechaun is rooted in history.  As The Sporting News noted, the Fighting Irish “name was somewhat cemented in 1924 when Notre Dame students violently clashed with the anti-Catholic Ku Klux Klan and drove the Klan out of South Bend and helped bring an end to its rising power in Indiana at a time when the state’s governor was among its members.”

And so -- even if the leprechaun resembles the ape-like Irish of many a Thomas Nast cartoon -- its defenders want us to understand that this image is rooted in the days when the Irish were looked down upon and had to fight for their place at the social table.

It’s the old American story of a marginalized group seizing control of the very words and images bigots had once used to oppress them.

Which brings us back to Jay-Z.  Watch the “Story of O.J.” video, you see it looks like the nastiest, most racist cartoons produced in the early days of animation.

The kind of awful stuff Warner Brothers or Disney have gathering dust in the darkest corners of their vaults, if they haven’t already directed some poor intern to burn this vile stuff.

For what it’s worth, Jay-Z also drops the N-word more than 50 times in the song.

But, of course, no one is going to call Jay-Z a bigot.

Because we know what he is doing here.  He has taken words and imagery once used to oppress African Americans and seized them and turned them around.

You know.  Just like the folks at Notre Dame did.

So fine.  Keep the angry leprechaun.  But can someone please ask Congressman Luke Messer what his favorite Jay-Z song is?