An ESPN host claimed that Notre Dame's nickname, the Fighting Irish, and Leprechaun mascot are racist in a similar way to the Cleveland Indians' Chief Wahoo. That is not the case.

An ESPN host claimed that Notre Dame's Fighting Irish symbol is racist in like the Cleveland Indians' Chief Wahoo. That is not the case.

Likening Notre Dame’s mascot of the “Fighting Irish” to those depicting Native Americans such as the Cleveland Indians, Washington Redskins, and Chicago Blackhawks is an argument that is a non-starter – not least because American Indians are, to this day, victims of abject poverty and systematic oppression to devastating levels while the Irish in America are generally not discriminated against in this country to a harmful degree.

On the ESPN show 'First Take,' co-host Max Kellerman recently argued that in the wake of the Cleveland Indians’ decision to no longer use their mascot Chief Wahoo, the University of Notre Dame should also consider what he described as the racist implications of their “Fighting Irish” team.

However, there is a simple reason as to why the ‘Fighting Irish’ is acceptable while the ‘Redskins’, ‘Blackhawks’ and ‘Indians’ are not. It is the issue of agency, of who is representing whom. The latter three are franchises owned by white men who profit off of predominantly white fan bases with a brand depicting whimsical, caricatured American Indians, promoting colonialism and racism at once while giving American Indians no real voice in the matter.

'Chief Wahoo' logo on its way out. Photo: Wikimedia Commons

The ‘Fighting Irish’ was a nickname consciously adopted by a predominantly Irish-American institution symbolically celebrating the school’s triumph in defying the prejudices hoisted upon Irish-Americans in the 19th and 20th centuries from various elements of WASP America. In a sense, the adoption of this nickname, and subsequently, the leprechaun as a symbol for the school was an action that contested harmful and hateful stereotypes and flipped them into cultural markers of pride and self-representation.

The name almost definitely descends from the “Fighting Irish” brigades in the American Civil War. One narrative claims that the “Fighting Irish” gained currency as a name following de Valera’s stop to South Bend in 1919 on his tour to America in order to drum up support for Irish independence. Another credits its eventual salience to the frequent references of a writer for the Daily News in New York covering the football team in the 1920s for the city’s Irish-American audience.

It would be impossible and inaccurate to write a history of 20th century Irish-America without accounting for the significance of Notre Dame, in both sporting and educational contexts.

The “Fighting Irish” football team challenged the ascendancy in the ‘20s, ‘30s, and ‘40s of schools which at the time were bastions of White Anglo-Saxon Protestant elitism such as Yale and the University of Chicago. It became the most successful and popular college football team in the nation over the course of the 20th century, evolving into a national spectacle which attracted the support of Irish-Americans, and Catholics more generally, from coast to coast.

Many Irish-Americans incorporated Notre Dame into their own idea of the American Dream. To see their children and grandchildren go to Notre Dame was, and still is, a great wish for many.  I witnessed this firsthand. The influence of Notre Dame was so pervasive in my Irish-American community that, even 20 years ago, my immigrant grandfather, a New York bus driver, had me thoroughly brainwashed by the age of six that I would be going to Notre Dame. 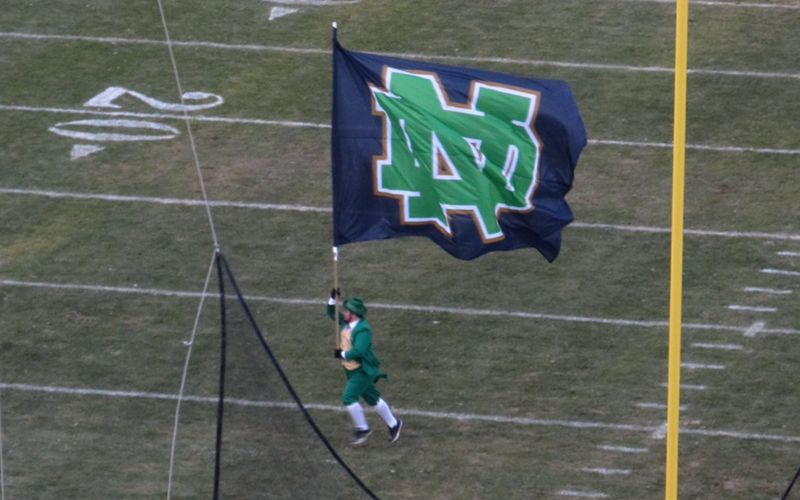 To this day, Notre Dame’s connections with Ireland are substantial. The university runs academic centers in Dublin and at the iconic Kylemore Abbey in Connemara. In 2012, the famous football team traveled to Dublin to play a game in the Aviva Stadium and the whole affair was a massive success for both Notre Dame and Ireland. Notre Dame apparel with the leprechaun logo in question can be seen regularly throughout Ireland.

The Keough-Naughton Institute for Irish Studies is a world leader in the field of Irish Studies, in an era in which many think that higher education is crucial to the reproduction of Irish-American identity. The Irish Language and Literature Department is the first in the country to establish a major in the Irish language, and the only workplace in America where Irish is the spoken language. As a student there, the reassurance, familiarity, and encouragement I gained from the Irish community almost single-handedly ensured that I sanely survived the depths of Indiana winters.

To be sure, Notre Dame is not institutionally a flawless and authoritative body on what it means to be Irish-American. As a first-generation Irish-American student there, I found St. Patrick’s Days in South Bend to be particularly cringy celebrations. At football games, the marching band is bizarrely led by a line of men imitating the London Guard. I remember the Provost of the University once praising Margaret Thatcher as a “compassionate” friend of his in front of thousands of students, while the controversial John Waters, who claimed that the Tuam Babies scandal was a hoax, was given a platform at the university to speak on the matter just a few months ago.

Still, the “Fighting Irish” nickname is, above all, a testament to the university’s historical and present-day status of a powerful and significant Irish-American institution, celebrating the symbiotic relationship between Notre Dame and Irish-America over the years. To suggest that the name is offensive is to be neglectful of history, at best, and extremely damaging in the discussion over American Indians, at worst. It risks plunging to the depths of foundationless self-victimization not entirely dissimilar from that of the promotion of the Irish slave myth.

Notre Dame, like St. Patrick’s Day, is an iconic marker of the various expressions of Irishness in this country. If one actually feels that the nickname is guilty of “cultural appropriation” to an offensive degree, then they should also go ahead and leave March 17 as just another day. More green beer for the rest of us, I suppose.

Eugene O'Driscoll is an historian of the Irish diaspora and global migration, educated at Notre Dame and Oxford.