Margaret 'Maggie' O’Neill was one of three people traveling in the small plane that crashed in Queens, New York on October 4 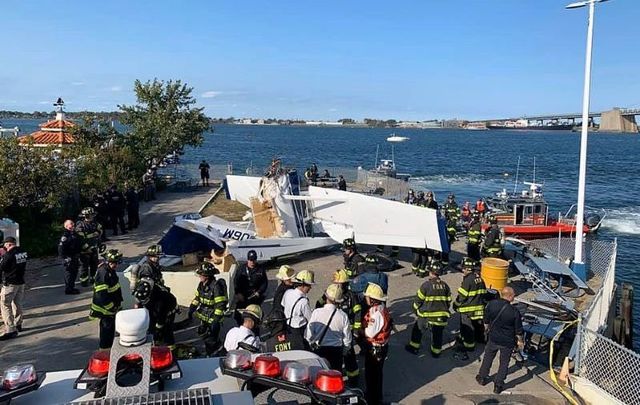 Margaret ‘Maggie’ O’Neill, a native of Co Armagh in Northern Ireland, was killed when the small plane she was traveling in crashed into a pier in Queens in New York City on Sunday, October 4.

An online obituary remembers 61-year-old O’Neill as a “sister, auntie, and friend,” as well as the “loving mother” to her two sons Brendan and Christopher.

O’Neill’s longtime partner Jose Urena, 66, was also traveling in the seaplane that was piloted by Joe Oppedisano. Both Urena and Oppedisano, who own two planes together, survived the crash but were hospitalized with injuries.

According to the New York Daily News, the seaplane crashed near the Throgs Neck Bridge at 158th Street and Powells Cove Boulevard in the Whitestone section of Queens at about 3 pm Sunday, October 4.

FDNY Fire Commissioner Daniel A. Nigro said that day: "We received a call of a seaplane hitting a concrete pier. Units arrived within four minutes.

"Two of the occupants of the plane were already removed by a good samaritan who came to their aid who had witnessed the plane hitting the pier. The third victim was removed by members of the FDNY.

"Witnesses said that the plane was traveling rather fast along the water, skipped twice, and hit the pier. An investigation will proceed into how this accident occurred.

"Two other people, including the good samaritan, were treated on scene and refused further medical aid. The remaining fuel was offloaded by our HazMat units."

“We received a call of a seaplane hitting a concrete pier. Units arrived within four minutes. Two of the occupants of...

NBC 4 New York was at the scene and spoke with Jarret Schupak, one of the "good samaritans" who rushed to rescue the three passengers on the plane:

Alberto Vargas told the New York Daily News that his brother-in-law Urena “has spine and lung complications and his chin also got pretty banged up.

“The doctor told him he was very lucky to have survived ... We’re relieved that he’s okay.”

Vargas said the trio were returning home from a day trip to Maine.

“We’re not clear on what was the cause of the accident,” Vargas said. “No one is clear on that.”

“We are very sad and heartbroken that she is gone.”