Lion King cast members were "subjected to racial and homophobic abuse, both verbally and with the threat of violence" after they left a recent performance in Dublin. 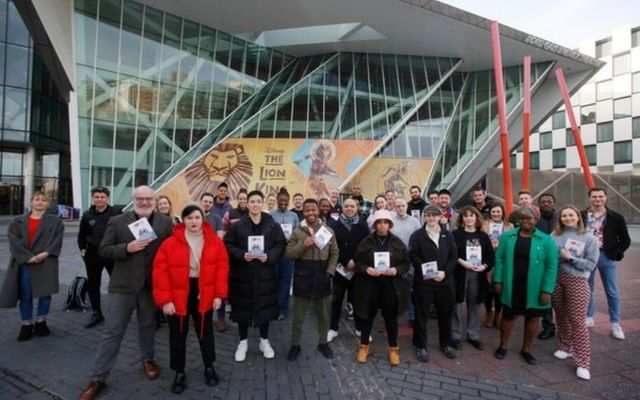 Staff from Irish Network Against Racism come together with cast and crew from Disney's The Lion King and Stephen Faloon, Manager at Bord Gáis Energy Theatre to show their support for INAR's Love Not Hate campaign. Rolling News

The cast and crew of The Lion King musical have alleged that they were subjected to "racist and homophobic abuse" as they made their way home from a performance at Dublin's Bord Gáis Energy Theatre.

English star Stephenson Ardern-Sodje, who plays Simba in the popular musical, revealed on social media that cast members were "subjected to racial and homophobic abuse, both verbally and with the threat of violence".

"It was a huge blow that hit us hard as a company, opening old wounds for many," Ardern-Sodje said on social media.

"This isn't the first time many of us have experienced something like this, and it's unlikely to be the last, but in these darker moments it's good to be reminded 'that the night must end and that the sun will rise'."

British actor Rushand Chambers said the cast had enjoyed a good experience in Dublin with a "beautiful" theater and audience but added that the cast could ignore the "ugly side".

"The country needs healing, it's just not our job to do so," Chambers said.

Gardaí have confirmed that they are investigating an incident on January 28 on Hanover Street East, a short distance from the Bord Gáis Energy Theatre.

A Garda press officer told IrishCentral that "a number of staff were subjected to verbal abuse by a group of male youths" shortly before 11 pm on January 28.

In a statement on Twitter, the theater described the abuse as "vile".

"We are saddened to share that several of the performers and crew of The Lion King, currently performing at Bord Gáis Energy Theatre in Dublin, were recently subjected to racial abuse on their way home from the theatre.

"It is shocking that something so vile and appalling happened to our colleagues who have brought such joy to thousands of theatergoers since the show opened on 31 December."

French actor Jean-Luc Guizonne, who plays Mufasa in the musical, shared the statement on his Instagram account along with Black Lives Matter and Stop Racism captions.