Rescued! All 12 Thai boys and soccer coach have been brought to safety thanks to anonymous donor of oxygen tank valves all the way from County Limerick. 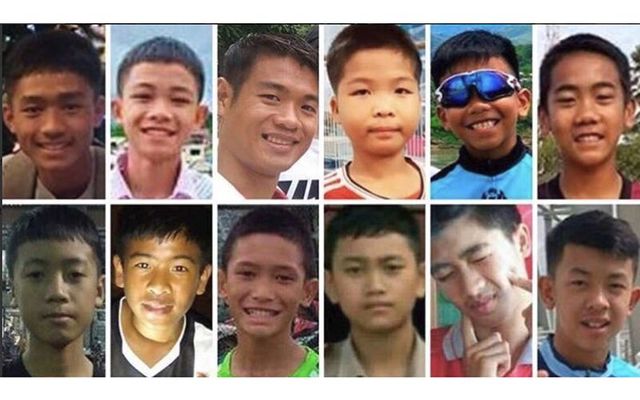 The 12 Thai soccer players and their coach have been rescued from a flooded caves after two weeks. Twitter / Family's own

Rescued! All 12 Thai boys and soccer coach have been brought to safety thanks to anonymous donor of oxygen tank valves all the way from County Limerick.

All 12 Thai boys and their soccer coach have been rescued by Thai Navy SEALs from the cave complex where they were trapped for over two weeks. The international rescue missing used an older model of regulation valve on their oxygen tanks which they finally sourced in County Limerick.

The first eight boys were bought out on stretched during the first two days of the rescue mission on Sunday and Monday while the final four boys and the 25-year-old coach were freed on Tuesday. The young boys were aged between 11 and 17. They had been stranded since June 23.

The Wild Boar football team were found together on a small, muddy bank in a flooded chamber within a cave system in the region of Chaing Rai, in the northernmost province in Thailand, close to the borders of Laos and Myanmar.

As the rescue mission progressed and an international team tried to figure out how to rescue the boys even Elon Musk offered his help visiting the site and offering the use of his mini-submarine to help the rescue, but it was deemed not practical by the rescue leaders.

Just returned from Cave 3. Mini-sub is ready if needed. It is made of rocket parts & named Wild Boar after kids’ soccer team. Leaving here in case it may be useful in the future. Thailand is so beautiful. pic.twitter.com/EHNh8ydaTT

It was reported on Tuesday morning, in the local newspaper The Limerick Leaders, that the Thai officials had realized they need an older model of regulation valve for the oxygen tanks rescuers were using and they launched a global search.

It turns out that a gentleman in Cappamore, County Limerick, was able to help out and on Friday night they equipment was collected and shipped out to Thailand.

A source told the Limerick paper “Last generation scuba tank regulators were collected on Friday evening from a gentleman in Cappamore. By the following morning, they were in Thailand as part of the rescue mission.

"It’s a small world when Cappamore is part of an international rescue effort in Thailand.”

The head of the rescue, Narongsak Osottanakorn, told the media that the final day of the mission would be the most taxing as not only the final four boys and the coach but the three Navy SEALs and the medic, who had stayed with the boys throughout their ordeal, would also be extracted.

The route back out of the caves is nearly four kilometers long and is in places submerged underwater and in complete darkness.

Word that the team made it out safely was met with celebrations. A CBC reporter on the ground said, “There's just a lot of happiness in the atmosphere right now, people taking pictures, hugging, really just a sense of elation that the mission today was so successful.”

The boys and their coach will remain in hospital for at least a week under observation. They are being fed a rice-based porridge as they are still too weak to eat regular food however they have been reports that the boys requested chocolate bread.

Two of the boys have suspected lung infections. The four boys rescued on the first day of the mission are reported to be doing well and walking around their beds.

The doctors monitoring their care are currently quarantining the boys because of the risk of infections.

Thai’s permanent secretary at the Public Health Ministry Jedsada Chokdumrongsuk said they were uncertain what type of infections the boys could face "because we have never experienced this kind of issue from a deep cave."

However, they appear to be doing well and have suffered no complications to their eyesight despite spending multiple days in the dark.

Now that the rescue mission has come to an end Thailand’s Prime Minister Prayuth Chan-ocha said increased security will be introduced at the cave made "world famous" by this week's heroic rescue operation.

"In future, we have to monitor the entrance and exit to the cave. This cave has become world famous," Prime Minister Prayuth Chan-ocha said. "We have to install more lights inside the cave and put up signs. It's a dangerous cave."

Sadly, there was one fatality during the rescue mission. A former Thai military diver who was helping with the mission, Petty Officer Saman Gunan, drowned while attempting to deliver oxygen tanks to the young boys.

Remember RIP "Saman Gunan" A Thai Royal Diver who sacrificed his life to save the 12 Thai Soccer Team! pic.twitter.com/yUsDbGcRDx

The Chair of the Municipal District of Cappamore, Councillor Eddie Ryan, told the Irish Examiner "We all praise the person from our locality who it emerged has been so gracious to gift resources to the rescuers.

"It's a massive story all over the world with a wonderful outcome. Of course, we would like to also remember the diver who lost his life during the rescue who gave the ultimate sacrifice."

But, we are glad our district of Cappamore has played its part in the rescue of the boys and their coach.”