It seems Griffins of Kinsale was the only Irish pub in America open on Patrick’s Day because of quarantine regulations. 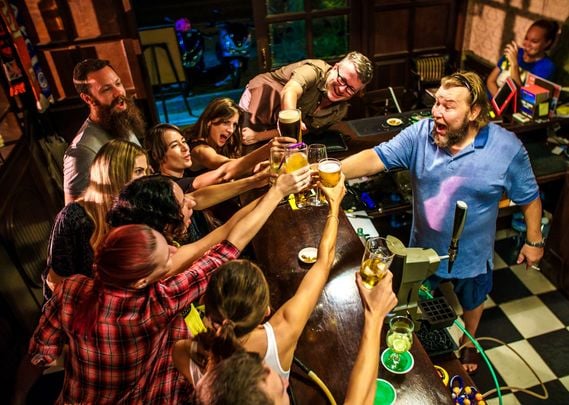 It seems Griffins of Kinsale, an Irish pub in South Pasadena, was the only Irish pub in America open on St. Patrick’s Day because of quarantine regulations.

Bar owner Joseph Griffin may be sorry he ever opened his pub on the city’s lively Mission Street during the great coronavirus shutdown.

Then the cops arrived with the Los Angeles Health Commissioner.

The “quarantine shaming” was reported In the Los Angeles Times.

“I’ve been here for eight years,” Griffin told the paper two days later. “To have people call me and my business out online so viciously — in some cases, to have people screaming at me and the employees of this bar — was incredible.”

Griffin, a father of 11,  said he didn’t know his pub was supposed to be closed when he opened it Tuesday at 7 a.m. The day before, the City of Pasadena had shuttered all bars.

Griffin said that he hadn’t heard and that no one from the city reached out.

He said he had live music, food and beer and all was going well until local residents objected.

As The Times reports “By around 7 p.m., South Pasadena police, tipped off by angry residents, showed up to Griffins of Kinsale for the third time — and on this visit, they were accompanied by someone from the L.A. County Department of Public Health. The pub was closed on what Griffin called his “most important night of the year.”

The pub owner is sure that jealous rivals did him in.“I’m not going to name names, because it doesn’t help, but we weren’t the only business open that night,” Griffin said. “I didn’t hear any complaints until the day of, and I firmly believe those came from other area businesses and from a few people determined to shut us down.

South Pasadena resident Steve Zikman was infuriated to see the pub open and a grand old party underway despite a Coronavirus crisis.

Zikman was upset “with everybody there sitting close to each other, drinking, socializing, and ignoring all of the social distancing rules that we’re all trying to get used to,” he wrote on Facebook.

Facebook followers expressed their outrage on the pub’s Facebook page. With claims that Griffin “put the community at risk for money,” they demonstrated “dangerous behavior.”

One local took matters into his own hands “I opened the door and screamed at them that they were all … horrible people,” Josh Albrektson tweeted at 6:45. “The cops with the county health commissioner closed the pub at 7 pm.

Griffin said: everything moved so fast. “The way attitudes have changed just in the last couple of days has been amazing,” he said.