Inauguration telegram from JFK among items in John Steinbeck auction

A telegram from president-elect John F. Kennedy inviting John Steinbeck to his inauguration is among a trove of the author's personal items set to be auctioned next month. 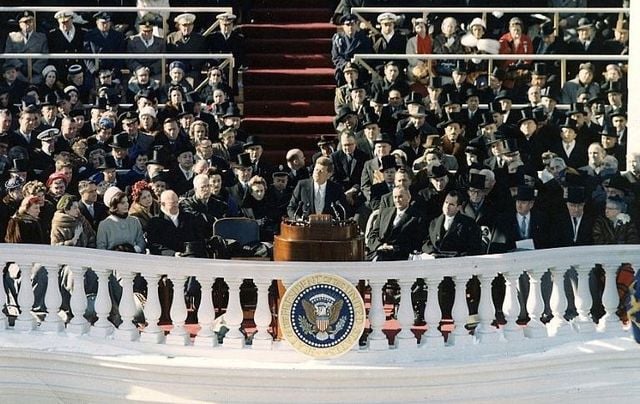 President-elect John F. Kennedy sent the Steinbecks an invitation to his inauguration via telegram in January 1961. Public Domain

A telegram sent from President-elect John F. Kennedy and his wife Jackie to author John Steinbeck is among the items that are set to be auctioned in New Jersey in February.

Read More: 58 years ago today John F Kennedy was inaugurated as President of the USA

Curated Estates, based in New Jersey, says they’re proud to present the personal memorabilia of the late John Steinbeck, author of “Of Mice and Men” and “The Grapes of Wrath,” and his wife Elaine.

"John Steinbeck is one of America's greatest storytellers," says the auction house. "His work has garnered him The Pulitzer Prize, The National Book Award and The Nobel Prize. Elaine Steinbeck was a tour de force in John's life accompanying him around the globe on travels. Elaine was notable in her own right as one of Broadway's first female stage managers.

“This auction goes through John's life from childhood to eighteen years of John and Elaine's marriage to Elaine's life after John's passing. These important objects and ephemera have been in storage for almost 20 years and are offered to the public for the first time here.”

Among the trove of more than 200 items is a telegram from then-president-elect John F. Kennedy and his wife Jackie inviting the Steinbecks to the presidential inauguration celebrations.

The telegram from the president-elect and Mrs. Kennedy dated January 12, 1961 reads: “During our forthcoming administration we hope to seek a productive relationship with our writers, artists, composers, philosophers, scientists and heads of cultural institutions.

“As a beginning, in recognition of their importance, may we extend you our most cordial invitation to attend the inaugural ceremonies in Washington on January 19 and 20.

“Reservations for inaugural concert, parade, ball are held for you. Room accommodations and hospitality will be arranged for you by a special sub-committee. RSVP which events desired and what accommodation needed by telegraphing Kay Halle.”

Kennedy's telegram to the Steinbecks (CuratedEstates)

John Steinbeck and Elaine attended the inaugural address with fellow author John Kenneth Galbraith and his wife. Afterward, the group was filmed in a car discussing the address as part of Robert Drew's documentary for ABC Close-up show called "Adventures on the New Frontier":

Later, Steinbeck recounted the day’s events in a chapter that was ultimately omitted from his “Travels with Charley,” which was published in 1962. The chapter read in part: “I got us to our seats below the rostrum of the Capitol long before the ceremony—so long before that we nearly froze. Mark Twain defined women as lovely creatures with a backache. I wonder how he omitted the only other safe generality—goddesses with cold feet. A warm-footed woman would be a monstrosity. I think I was the only man who heard the inauguration while holding his wife’s feet in his lap, rubbing vigorously. With every sentence of the interminable prayers, I rubbed. And the prayers were interesting, if long. One sounded like general orders to the deity issued in a parade ground voice. One prayer brought God up to date on current events with a view to their revision. In the midst of one prayer, smoke issued from the lectern and I thought we had gone too far, but it turned out to be a short circuit.”

Kennedy and Steinbeck enjoyed a friendship “joined at the funny bone,” according to Steinbeck scholar William Ray. After Kennedy’s assassination, Jackie asked Steinbeck to pen his biography, but Steinbeck ultimately declined.

Also included in the auction are John and Elaine Steinbeck's response to Kennedy's assassination, and the telegram Elaine sent to her mom who lived in Texas after John F Kennedy was shot.

The auction for the Steinbeck lots will begin on February 27, John’s birthday, at 2 pm EST.