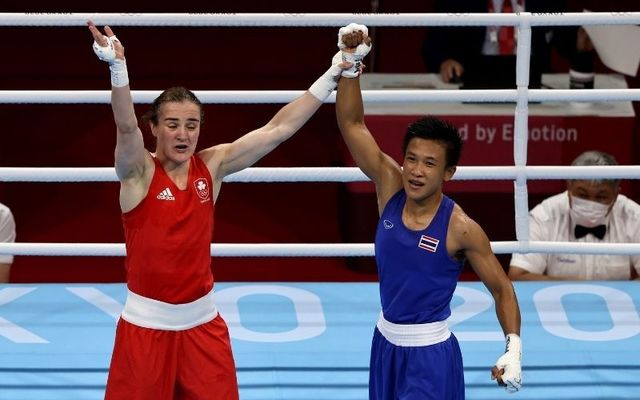 Harrington is now guaranteed at least a silver medal in the women's lightweight division after she prevailed 3-2 on the judge's cards on Thursday morning.

The Dublin fighter had previously beaten her Thai opponent in the 2018 World Boxing Championship final and edged ahead in a closely fought opening round on Thursday, making use of her natural power to take the round 3-2 on the judge's scorecards.

Seesondee fought back in the second round, landing a powerful left hook and a number of straight right hands to level up the fight on the judge's cards.

However, Harrington showed composure and class to seize the initiative and stamp her authority on the fight in the final round. The Dubliner landed a solid left hook in that final round and mostly stayed out of range of Seesondee's attempts to claw her way back into the fight.

Three judges awarded the fight to Harrington on a 29-28 scoreline, while the remaining two judges scored the fight 29-28 in Seesondee's favor.

Harrington praised her opponent in the aftermath of Thursday's final, labeling Seesondee "a fantastic operator".

"She has a really, really strong left hand, so I was trying not to get hit with that and trying to stay away from it!" Harrington told RTÉ.

"Trying to tease her on, like my coaches said, and then counter. I felt a little more comfortable towards the end, standing instead of running. It was fantastic, just brilliant."

Ferreira is the reigning lightweight World Boxing champion after winning gold in 2019 when Harrington was forced to withdraw with a thumb injury.

The Brazilian, who was the marginal pre-tournament favorite ahead of Harrington, proved far too much for Finland's Mira Potkonen in the other lightweight semi-final, easing to victory via unanimous decision.

Harrington will become just the third Irish boxer to win an Olympic gold medal if she can overcome her formidable opponent in Sunday's final.