Keith Byrne has signed ann application for an Irish passport which could which result in his deportation. He was given until Friday to leave the US. 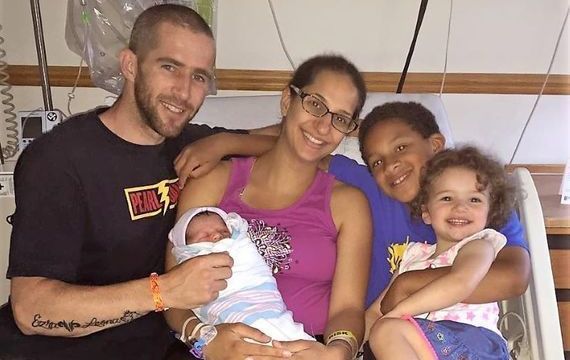 Lawyers for Keith Byrne continue to fight against his deportation from the US as the undocumented Irishman applies for an Irish passport.

Keith Byrne, an undocumented Irishman who was arrested by Immigration Control and Enforcement in the US last week, has signed an Irish passport application that could lead to his deportation.

The Cork native was given until Friday to sign the passport form which would spark the deportation process or face being detained for at least a year as his case went through the courts.

Byrne's lawyers on Friday confirmed that the Irish immigrant had signed the passport form but that their legal team was continuing to fight against the action.

Keith and Keren Byrne on their wedding day.

“With a family of US citizens who depend on him, home-ownership and a successful tax-paying business Mr. Byrne is not a flight risk,” Thomas Griffin, the Philadelphia-based lawyer representing Byrne, wrote in the letter to Simona Flores, director of enforcement and removal operations for ICE (Immigration and Customs Enforcement) agency in Philadelphia.

“Mr. Byrne’s custody has already torn him from his family, and his US citizen wife Keren and his three US citizen children who are on the verge of a massive upending of their lives.”

Griffin also noted that Byrne “has never been a danger to the community and he is not a national security risk” having had no dealings with the police since arriving in the US.

The team is currently fighting to have Byrne's Irish marijuana charges vacated, using the case of The Beatle's John Lennon as an example.

"John Lennon had cannabis possession against him in the UK - John Lennon wasn't thrown out," Byrne's father Jim told an Irish radio station.

"The cannabis was scratched and John Lennon was allowed to stay - now John Lennon would probably have been better off if he had of been kicked out.

"He signed the papers and he's got two to three weeks now for his reps to sort out whatever it is they're working on," he added.

"That's as much as I know, I'm waiting for a call myself from Keith - that's just as good as it goes now.

"When the three weeks are up, if the lawyers and the Congressman can't work anything out he'll be home.

"I feel bitterly disappointed in that the Government here had no intervention or no even interest in the matter.

"And I'm not just talking about Keith - there were 45 Irish people deported from America last year.

"I don't know the circumstances of their deportation, but the Government never intervened in one of them.

"When [Taoiseach] Varadkar was asked yesterday about the case, he said 'I'm familiar with the case but I have no notion of interfering.'

"It's nonsensical... Government involvement in all these things - it's a joke.

"Only one TD called here to my house - Kevin O'Keeffe - to see me Monday evening.

"He couldn't believe that nobody actually called."

Do you think the Irish government should intervene in the case? Let us know in the comments section, below.