Jonathan Ruane reached the summit of Mt Everest in the early hours of May 15, becoming the first person from Co Sligo to ever complete the feat. 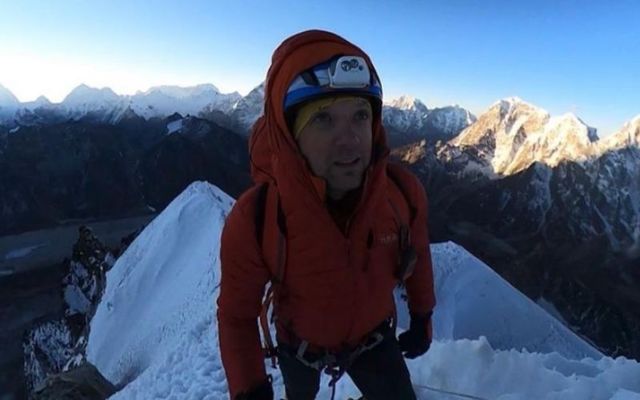 Jonathan Ruane has become the first person from Co Sligo to successfully reach the peak of Mt Everest, having arrived at the summit at 5:30 am local time on Sunday, May 15.

"I was incredibly lucky," Ruane, who is also a lecturer at the Massachusetts Institute of Technology in the US, wrote on Instagram on Tuesday. "The expedition went off without a hitch.

"The push for the summit went exactly to plan and we hit the top at dawn - meaning most of the climbing was done by moonlight and arriving at the summit as the sun came up. Couldn’t have been better.

"I got back from the summit to the lower altitude of Camp 2 in just a few hours and am now all the way through the ice field and safely back at base camp.

"There are too many people to thank, so I’ll do that later. For now, I’m still enjoying the feeling of being on top of the world."

On Monday, Jonathan’s sister Stephanie beamed with pride while chatting with OceanFM back in Ireland: “We are absolutely delighted and thrilled with the news.”

Stephanie said that at about 12:30 am Irish time, she and her family received a text from “on top of the world” - Jonathan had pre-written the text and was able to send it to his family back home in Ireland through his watch once he was at the summit.

“We were absolutely delighted and able to take somewhat of a breath of relief,” Stephanie said. “I think the real breath of relief will come when we get to see him in the flesh at the airport, hopefully later this week.”

She continued: “Of course, for him, it wasn’t all about just getting to the top, it really is about the journey, the training, the commitment, the dedication that you have to put into something like this to even start on a journey to something like Mt Everest.

“We were just so delighted that he was able to get the icing on the cake which is reaching the summit.

“Even in the text message, he said this has been such an exciting adventure and I think that really sums it up for him. It’s all about the adventure and getting out there and taking steps into unknown territory for him.”

Stephanie said with a laugh that her parents were “cracking into the Jameson to celebrate” after they received word that Johnathan reached the summit.

Ruane’s impressive feat was celebrated by Irish Seven Summits, who noted that he has become the first Irish summit of Everest this season, as well as the first person from Co Sligo to ever complete the feat.

Ruane is one of six Irish climbers who attempted to summit Mt Everest this season and has now become the 56th Irish climber to reach the top of Mt Everest.

Jonathan Ruane has just become the 1st Irish summit of Everest this season and is the first from Sligo to ever do so!...

TUNE IN: Day three of the Ireland Today 2022 virtual conference this Sunday