Statue of Irish-born slave owner taken down in Baltimore, Maryland 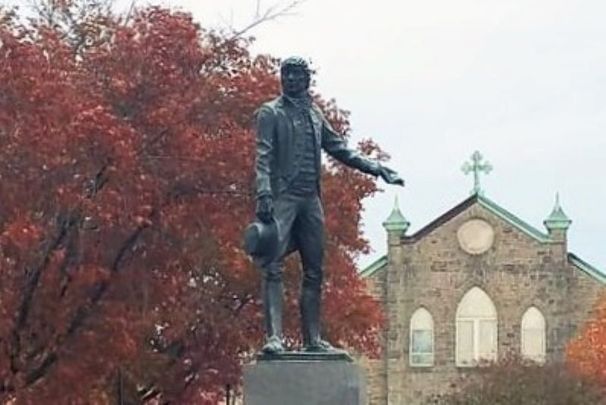 Captain John O'Donnell, a native of Co Limerick, arrived in Baltimore in 1785 and went on to found a plantation that held dozens of slaves.

A statue of Irish man Captain John O'Donnell in the Canton area of Baltimore, Maryland was taken down on April 5 following a petition and letters from local anti-racism groups.

The removal of the Captain O'Donnell statue.

According to Norman G. Rukert's "Historic Canton," Captain John O'Donnell was born in Co Limerick in Ireland in 1749. In his youth, O'Donnell "ran away to sea and found himself in India, amassing a sizeable fortune before he was thirty."

As an employee of the British East India Company, O'Donnell lived in India for 16 years. Around 1780, he captained the ship Pallas from China to Baltimore, bringing with him plenty of exotic goods.

In 1786, O'Donnell purchased 11 acres of land in Baltimore, which eventually grew to more than 1,900 acres. O'Donnell named his plantation Canton, which is what English speakers at the time called the Chinese port city of Guangzhou.

O'Donnell had seven children with his wife Sarah Chew Elliott. It is believed only one, Elliot, returned to his father's native Ireland to study at Trinity College Dublin.

Captain John O’Donnell died in October 1805; at the time, he was one of the wealthiest men in the US.

In 1980, the Canton Improvement Association installed the statue in O’Donnell Square Park. An inscription marker at the site described O'Donnell as “a man of great vision and accomplishment."

In November 2020, the Canton Anti-Racism Alliance, with the support of the Canton Community Association and other members of the community, issued a letter to then-Mayor Bernard C. "Jack" Young calling for the immediate removal of the 41-year-old statue.

The letter said in part: “Captain John O’Donnell founded Canton as a plantation in 1786. A statue in his honor was erected in O’Donnell Square Park in 1980. Public records have confirmed that Captain O’Donnell was an enslaver.

"Slavery is morally reprehensible and we, as a community, categorically reject monuments to enslavers.”

The letter also referenced an October 2020 op-ed in the Baltimore Sun penned by John Linwood of The Linwood Project who said: "As a Black homeowner living in Southeast Baltimore, the presence of John O’Donnell’s statue at Canton Square is more offensive to me than any statue of Christopher Columbus."

Linwood noted how the statue was placed on the same grounds where Captain O’Donnell kept more than 30 enslaved Africans who tended to O'Donnell's livestock and crops, kept his house, and served as waitstaff.

Linwood wrote: “Such nods to the shames of our past have no place in our city and must go if we wish to seek real healing and atonement for our past, and cultivate a Baltimore that welcomes everyone everywhere.”

Linwood went on to demand that Mayor Young not only remove the statue, but also rename Canton, rename O’Donnell and Elliott streets (his wife’s maiden name), and rename the O’Donnell Heights neighborhood.

An online petition was also circulated via Change.org that has gained more than 800 signatures since being created six months ago.

Mayor Scott added that he is "committed to dismantling structural oppression in Baltimore."

Tonight, the hostile vestige to the notorious enslaver Captain John O’Donnell no longer stands in Canton Square. This is a historical moment and I am committed to dismantling structural oppression in Baltimore.