The former Social Democratic and Labour Party leader is suffering from dementia. 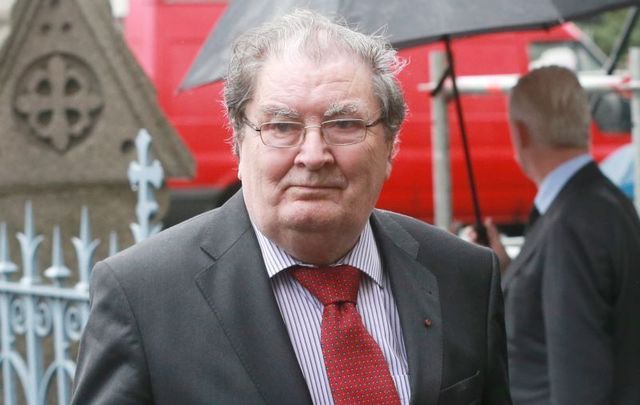 The wife of former Social Democratic and Labour Party (SDLP) leader and Nobel Peace Prize winner John Hume has revealed that her husband has been diagnosed with dementia and is suffering from “severe memory difficulties.”

Hume was a critical figure in the Irish peace process. His decision to enter talks with Sinn Fein leader Gerry Adams was considered a courageous act at the time. He is very well known in America, where he was a confidant of presidents and major figures such as the Kennedy family on Irish affairs.

Speaking on "Sunday with Miriam" on RTÉ Radio 1, Pat Hume said her husband, now 78, suffered brain damage as a consequence of an illness he developed in the late nineties.

“Unfortunately John is having severe memory difficulties at the moment,” she said.

“He has a form of dementia. This started in the late nineties. John was speaking at a conference in Austria and he became very, very seriously ill.”

She said that the illness “hasn’t taken away all his quality of life” as Derry is a “very dementia-friendly city.”

“People love John,” she said. “He can go out for a walk. Every taxi in the place will stop for him. He’s extremely lucky that way. I can go for a walk myself. He can do his crosswords. He can enjoy the paper. So it could be worse.

“His memory is very bad. If John was speaking to you now and I said to him in half an hour, ‘it was lovely to see Miriam’, he would say ‘where did we see Miriam?’ He just wouldn’t know that he’d seen you.

“If he was out for a meal, he’d be back for half an hour and I would say ‘it was lovely food we had tonight’ and he would say ‘what food?’ So it really is very sad.”

Speaking of her role as a carer for her husband, Pat said sometimes it could be “very tough.”

“Especially at the end of the day, and you know when somebody asks you the same question twenty times and you’re giving the same answers, and it’s very hard to get up the energy to be pleasant, so it can be tough,” she said.

“I am very blessed in that I have a daughter in Derry who is a doctor and she keeps a very good eye on him.”

She said said that Hume does not like to travel too far from County Derry.

“For a man who traveled the world non-stop, he doesn’t like being away from home now,” she said. “He loves Derry. He loves going down to Donegal because they’re very familiar to him.

“He doesn’t like going to Dublin. If he goes to Dublin now, he’ll say ‘right, we’ll go home now’ – and John loved Dublin and he loved Europe and America. Now he’s not interested. Amazing.”