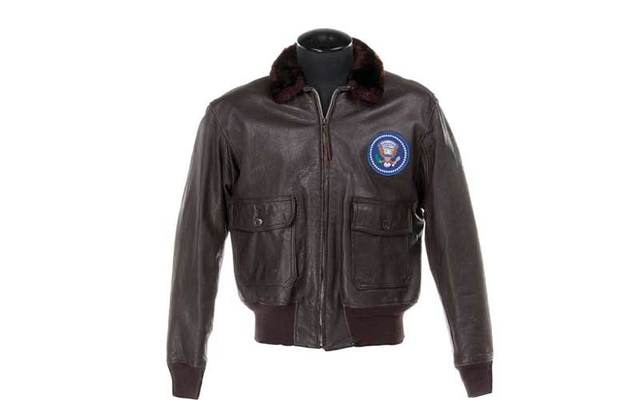 John F. Kennedy’s Presidential bomber jacket will be sold next month as part of an auction of historic memorabilia at Profiles in History.  The jacket is expected to fetch between $250,000 – $300,000.

The dark brown leather G-1 Bomber Jacket was purchased by President Kennedy on December 5, 1962.  The jacket includes the original official U.S. Navy invoice for the purchase of "3 Flight jackets sold to Pres US.”

Kennedy's jacket and other personal effects were recovered aboard the Presidential yacht on November 27, 1963, just five days after he was assassinated.

The jacket was sent to White House Staff member Lieutenant Henry E. Hirschy, Jr., who was responsible for supply and logistic support for Kennedy at Camp David and aboard the presidential yachts.

Accompanying the jacket is an original handwritten note, "From Honey Fitz 11/27/63,” listing two flight jackets among the President's personal clothing, including one featuring the seal of the Marine One presidential helicopter (HMX-1) and the present jacket bearing the Presidential seal, which Hirschy and his family were allowed to keep as a memento.

The jacket, which goes to the auction block on July 23, is nearly identical to another JFK leather bomber jacket that was  sold for $629,000 in 2013.