Irish Olympian Jack Woolley says he is focusing on the positives after being randomly attacked in Dublin City, causing shocking injuries that required surgery. 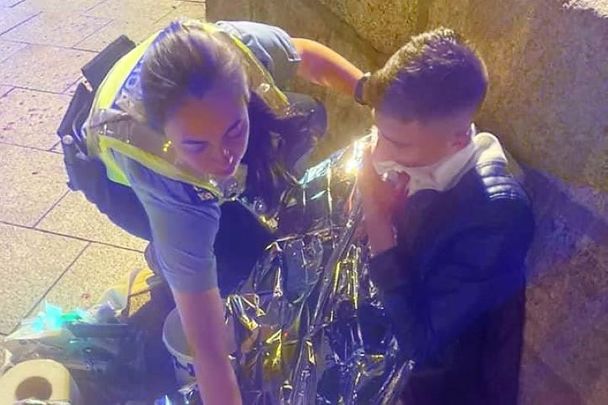 Irish Olympian Jack Woolley shared photos on his social media pages of the aftermath of the shocking attack in Dublin on August 14. Jack Woolley, Facebook

Jack Woolley, 22, is back at home recovering after being randomly and savagely attacked in Dublin City in the early hours of Saturday, August 14.

“I’m alright. It could be a lot worse," Woolley said on RTE’s Morning Ireland on Tuesday, August 17.

"Luckily, I kind of got off light compared to other people.  I’m doing as best I can, just recovering after surgery the other day.”

Woolley, who became the first athlete to represent Ireland in Taekwondo competitions at this year's Olympics in Tokyo,  shared photos of the aftermath of the shocking attack on his Instagram on Saturday (Warning: Graphic images):

The following day, Woolley’s mother said that she believes the attack was random: "I know there's some suggestion out there that he was targeted on purpose, but you know if you look at the circumstances, it really couldn't have been.

"Five other people all with no other connection to each other at all attacked at the exact same time in the same place.

Recounting the incident, Woolley told Morning Ireland that he “was just walking down the street in Dublin next to the Liffey.

"I turned around to check if they’re [his friends] okay because I heard a bit of noise, there was a few people on the street.

“By the time I turned back around to look where I was going, there was a few people kind of on the road.

“One of them just turned and hit me, apologized, said ‘Oh sorry, wrong person,’ and continued on their way down then to unfortunately assault other people down on the road.”

Woolley continued: “A lot of people were asking questions like ‘how come you didn’t you defend yourself?’ But with literally just one punch, a ring connected with my front teeth, bust my lip open, and at the time, the best thing to do was to get safe, get somewhere I could safely call an ambulance and just get seen to, and that’s what I did.”

Woolley said he had no time to react. “It’s a shame. I feel a bit embarrassed over it, but I could have got a lot worse if I had retaliated, god knows what would have happened because I know there was a lot more people in worse states by the same group of people.

“There was ambulances shared. I was the first one, I recall, being attacked, and I was the last one put in an ambulance, that’s how bad the other injuries must have been.

“I’m just very grateful that it didn’t turn out a lot worse.”

Woolley was taken to St. James’s Hospital in Dublin where he had to have his lip reconstructed back on.

“I had to be put under, get it washed out, cleaned out. The way it was cut was all the way straight through, there was a hole in my face. My top lip had completely come off so I needed to get stitches in the front and the back to get it back on. Now I’ve just got a plaster on.”

Woolley said he’ll get his stitches taken out on Friday and that he’s taking “every day as it comes.”

He added: “It’s not affecting me too much mentally, just a little bit of scarring physically.

“Just trying to get on with it the best I can, go back to the normal, go back to training as quick as possible. I don’t want my life to stop over a freak accident.”